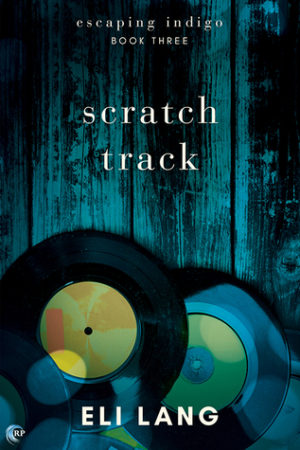 Though it wasn’t a path he’d actively chosen, Quinn has been taking care of others for most of his life. First by looking after his mother and younger brother, then as a roadie/semi-parental unit for the members of Escaping Indigo, he’s always tried to be the dependable one, the son/brother/friend that had everyone’s back. Even after experiencing an earth-shattering loss, he couldn’t allow himself to rely on someone else for a change—even if it cost him the only man he’d dared to want for himself. But, an unexpected reunion convinces Quinn that he can’t pretend forever, and that he’s loved far more than he ever realized.

In Scratch Track, the third in the Escaping Indigo series by Eli Lang, we finally get to know more about Quinn, who, in a sense, started everything off by bringing Micah into the band’s company. Though he was a significant presence in the first story, and an absent sort of anchor in the second, I was very much interested in learning more about him. To say that Quinn is “complicated” is an understatement.

As Escaping Indigo’s roadie and manager, Quinn’s role has always the one of the caretaker. It’s such an ingrained part of his personality that he has no sense of purpose without it, even when his younger brother died unexpectedly of an overdose. But, that loss causes him question his ability to care for everyone, which, in turn, makes him feel like an outsider to the “family” he’s nurtured within the band. While grief is absolutely a serious matter, most of Scratch Track circles around Quinn’s doubts with little progress sometimes, although I was glad to see him take steps to try and work through his own.

The remainder of Scratch Track involves the interrupted relationship Quinn has with Nicky, the drummer for another band (delightfully named Rest in Peach) who are sharing the recording studio with Escaping Indigo. Despite the somewhat implausible idea that Nicky has successfully kept his two-year-old son a secret from Quinn when the two bands are all friends and former tour-mates, I liked Nicky very much. Within the parameters of their reconnection, however, his passion, honesty, patience, and even justifiable hesitancy about starting over with Quinn made him one of the most relatable characters in the story.

As was the case with both previous stories in the Escaping Indigo series, Scratch Track leaves readers with the potential, but no absolute guarantees for the protagonists’ ultimate happiness. I think this HFN approach works well with the overall narrative here, given that one half of the equation has far too much at risk to take inadvisable chances, and the other is still unsteady from the weight of his own guilt and doubts. Additionally, Quinn and Nicky won’t have an easy time of things, with both going on separate tours and living in different places. Regardless, I’d love to know how they’re doing, and hope that the author might create a scene that provides some insight in the future.

Romantic without being overdone, Scratch Track is one of my favorites in the Escaping Indigo series. With a more thoughtful POV, it takes into account that, while caring for others is a wonderful thing, doing so to the detriment of those very relationships ultimately does more harm than good. Tactile and vivid in its imagery—from the pleasure of putting an album on a turntable to the shared escape of playing in a park—this story felt more accessible than its predecessors. As the series builds on familiarity with everyone in the band, I highly recommend reading the it from the beginning, as well as the additional scenes the author has on her website.

Being a roadie isn’t everyone’s idea of a dream job, but it’s all Quinn wants. He loves touring, loves getting to hear amazing music every night and, more than anything, loves being someone the band members of Escaping Indigo can lean on.

When Quinn joins the band in the recording studio, it’s supposed to be fun, but it only seems to remind him of doubts he thought he’d left behind—doubts about his brother’s death, his place with the band, and his ability to care for and support his friends. So when his ex, Nicky, tumbles back into his life, Quinn’s completely unprepared.

The failure of his past romance with Nicky is yet another strike against Quinn’s confidence. But Nicky’s unassuming kindness makes it hard for Quinn to resist a new entanglement. Quinn isn’t sure they won’t make the same mistakes again, but he wants a second chance, even if that means facing the past, learning to let his friends support him, and proving to Nicky that, this time, he’ll be someone Nicky can rely on.