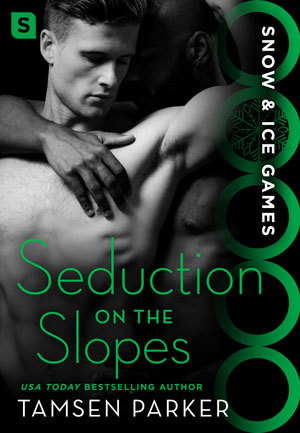 Miles is veteran skier on the U.S. downhill team. In the sport longer than some of his competitors have been alive, it’s his last year participating in the prestigious Snow and Ice Games (SIGs), and he plans on taking home two more gold medals. However, after that, Miles isn’t really sure where his life will lead.

Crash is the up-and-coming newest downhill sensation, and after Miles mentions to the U.S. coach the potential he sees in Crash, coach gets Crash on the SIG team and assigns Miles with mentoring duties. Crash loves to ski, but doesn’t love the endless press events and media time required at the SIGs. When his childhood idol, and long-time crush, Miles takes the time to help Crash, he will do whatever Miles says.

Seduction on the Slopes is the standalone sophomore title from Ms. Parker’s Snow and Ice Game series. This time around, romance blossoms between two men on the U.S. downhill team, and wow! is it hot. I like that both Miles and Crash are secure and confirmed gay men – albeit not entirely out of the closet. There is no confusion over preference, allowing for other conflicts to cause hesitation. The primary being that the pair are teammates and competitors. Yet, when Miles discovers why Crash struggles with the media, he genuinely wants to help him, even if that means helping him off in a sexual way.

As the pair spend time together, the mentor/mentee line blurs and a true bond of friendship develops. Their similarities and ability to relate so easily go a long way in closing any age gap that may make things awkward. And while Crash may be younger, he can be wiser at times. The two are competitors first, but because they are both truly good people, they can coexist as friends and lovers.

The romance moves quickly and the story comes with an HEA. I love how they come together and love the simplicity of the title. Sexy athletes falling in love? Sign me up for more!

Welcome to the Snow and Ice Games where competition is not the only thing that is heating up! The second book in bestselling Tamsen Parker’s romance series continues with two competitive teammates.

Miles Palmer has dominated the downhill slalom in every Snow and Ice Games he’s competed in. Double gold, double gold, double gold, and he’s confident he can round out his career and his trophy case with two more medals in his last appearance at the games. The only thing that could stop him? Crash Delaney.

Crash is a young upstart who came out of nowhere and shocked the downhill world with his swagger and untraditional style. As a kid, Crash didn’t have the resources to learn how to race properly, but he begged, borrowed, and stole equipment, and went to any competition he could thumb a ride to. Now the only thing between him and his dreams coming true is his childhood hero, the man whose posters have graced his walls since before he’d ridden in his first chairlift.

Miles and Crash are technically teammates, but you wouldn’t know it from the way they fight. The veteran and the nobody have both got big things riding on this race, and neither can afford any distractions. Especially not each other.

Reviews in the Series:
Love on the Tracks by Tamsen Parker (Snow and Ice Games #1)