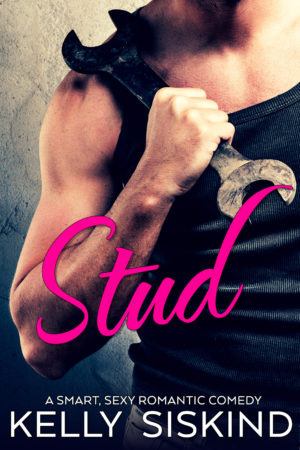 Ainsley made a wish on her birthday to change her life for the better and to stop helping powerful, adulterous men cheat on their lovely wives. However, she needs the money she earns from her personal shopping business to help her parents with their bills since her dad lost his job. So in order to balance the “ick” factor, she decides to start volunteering at Habitat for Humanity.

Owen moved back to San Fransisco from D.C. to get back to his roots. He’s volunteering his time and starting his own woodworking business, leaving the hustle and bustle of D.C. behind. In the middle of an ugly divorce, his ex accuses him of cheating on her and has turned all of their friends against him. He’s had no interest in women for over a year, until he meets Ainsley.

Stud is the second heart-warming romance in Ms. Siskind’s One Wild Wish series, which features three best friends trying to make their birthday wishes for a better life come true. The book takes place after the first title, Legs, but is a standalone story.

Ainsley and Owen both have been out of the dating scene for a while, and their combination of awkward starts and eagerness make for some funny and cute moments. The best is that Ainsley assumes Owen is gay (for good reasons), so she decides to make the most of her crush by treating him as her “gay BFF,” which includes frank sexual discussions. But when the pair finally gives into their mutual attraction, the heat level goes through the roof!

While I love, love, love Ainsley and Owen, unfortunately, Stud uses two “tropes/situations” that I just don’t like. First, I hate stories that use “false accusations” as a means for causing conflicts. I found myself frustrated with Owen’s ex accusing him of cheating, and the helplessness he feels over the situation. Second, Owen continually keeps the truth of his situation from Ainsley, which causes a number of issues. It made me mad because she tells him point blank her trust issues, yet he still thinks hiding the truth is better. Unfortunately for this book, this is one trope I detest. It’s not bad writing or a bad story, it’s just I don’t really care for the trope. In fact, Ms. Siskind does a very good job working around and out of the corners Owen works into.

In the end, I enjoyed Stud and loved Ainsley and Owen together. Their passionate moments were intense and deep. It was a hard read at times – hitting some of my pet peeves, but the characters worked through their issues, not always leading down the expected path each time.

A Habitat for Humanity project that erects more than walls…

The word “nail” has so many meanings:

Ainsley’s manicured nails belong in the Museum of Modern Art.

The fashionista hammers nails at Habitat for Humanity.

Owen’s never-ending divorce has taken a turn from messy to downright vindictive. Yearning for the simpler things in life, like working with his hands, he joins a Habitat build. Turns out he also wants to work over Ainsley Hall…but the confusing bombshell flirts blatantly with other men.

When Ainsley discovers Owen’s true sexuality, their mutual attraction ignites, but he hasn’t shared the extent of his divorce drama. If he can’t disprove his ex’s false allegations, it will take more than hammers and nails (and nailing studs) to keep their walls from caving in.

Reviews in the Series:
Legs by Kelly Siskind (One Wild Wish #1)