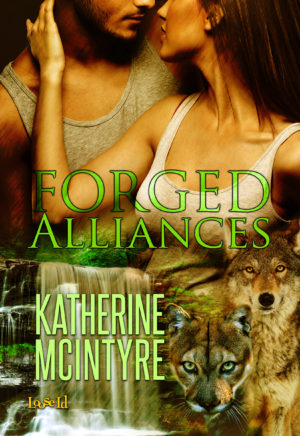 Tonight Sierra was spoiling for a fight.

She slammed into the Beaver Tavern’s door shoulder first, amber light spilling on her and the scent of tobacco threading through the air as she entered. Wooden planks creaked under her boots from her tread as she quick-stepped to the oaken bar on the opposite side. Three things lit her match without fail—abusive a**holes, idiots who didn’t use their turn signals, and unannounced shifters moving in on her territory.

Inside, her beast snapped at its confines, begging her to shift, to take to the woods and keep running, never turning back. Except leaving wasn’t an option, not since she’d become alpha of the Red Rock pack years back. Sounds of the bar in full swing washed over her, from the shouts and laughs to the clunks of heavy pint glasses hitting the tables.

“Sierra, what’s up your a**?” Jeremiah called over from a table as a lazy smile reached his hazel eyes. Her Red Rock pack filled the whole bar, since humans kept their distance from predominantly shifter areas, and in this part of Pennsylvania few would come strolling in.

She flipped him the middle finger. “Shut it, Streaky,” she called back, garnering a couple of smirks and laughs from the pack. After Jer had gotten caught buck-ass naked, stumbling out of at least three different tents at the last Fourth of July party, the nickname had stuck. Sierra made a beeline to where Raven manned the taps, dispensing dew to this loud and crazy lot. Sierra’s body brimmed with unspent tension. Fight, fight, fight pounded through her, an untamable urge, and her wolf prowled inside her, restless. As alpha, her rank heightened her tether to the beast, already one step away from primal.

“Shot of whiskey,” she growled, needing to regain control. Needing the reset before she engaged with her pack. Raven blinked at her, those deep-set eyes warm and welcoming as she reached for the bottle of Jack. Strands of the bartender’s thick black hair drifted over her shoulder as she passed it over.

“Boss, go for the whole thing,” she said with an amused smile. The bottle hit the counter with a thump, reminding Sierra of the massive inventory piling up in the back. The day she’d won the title of alpha, she’d also earned herself ownership of this dive.

“Thanks,” she muttered before unscrewing the cap and taking a swig. The amber liquid sloshed around the bottle, burning once the whiskey hit her lips. She soaked in the bliss, in the five-second distraction from the territorial urges pushing her toward an aggression-fueled pissing contest. Her skin prickled, hackles raised from her earlier run—from the note that had turned this day from sunshine-speckled to hellish.

She sucked down another swig, the burn of alcohol spreading through her before she returned the bottle to the counter. One deep breath, then two, and she started to feel normal again. The beast snarled but backed down. Sierra plunked onto one of the worn leather stools and leaned forward, elbows digging into the polished oak counter. Her tank top was glued to her chest, and her thick, obsidian locks plastered to her cheeks and her neck. The sweltering heat that swept the region wasn’t helping her mood in the slightest.

A hand snaked out in front of Sierra to tug the bottle away as the seat beside her creaked.

“Need to go a couple of rounds?” Finn asked, his dark eyes dancing with amusement at her barely contained rage. “Whatever’s got your wolf snapping is hitting the rest of us too. I’m assuming a summer squall’s brewing.” The beta of her pack dominated the stool, tall, with the lithe muscle of an MMA fighter—fitting, since he taught kickboxing classes six days a week. He’d been her sparring partner for years, and even back as teenagers, the bastard had played dirty, sand in the eyes and all.

“Storm’s ready to touch down,” Sierra muttered, slumping onto the counter. When it came to her pack, she made calls without hesitation—every member from the eldest to the littles had complaints, problems to solve, or disputes and fights she managed. However, this problem was in a whole different category. “We’ve got new neighbors, and they’re of the pain-in-my-a** variety.”

“Neighbors like us?” Finn asked, beckoning Raven with a finger. She sauntered over, brow lifted at being summoned that way. He tilted his head toward the taps, and she rolled her eyes before pouring him a pint. Sierra withheld her smirk, entertained by watching big dominant guys like Finn getting sassed back. All those powerful wolves didn’t make dating easy though, especially being alpha. As much as the guys liked to talk the talk of handling a woman more dominant than them, few could walk the line. She swallowed age-old bitterness of the lesson she’d learned the hard way.

Before she could respond to Finn, the door of the bar creaked open, drawing her attention.

She hadn’t even turned around before her wolf started yanking at the chain, begging to come out. The scent hit her nose at once, not the familiar one of her Red Rock pack, but this unfamiliar one that brushed her fur the wrong way. Claws pricked out from her nails before she could stop herself, and she wasn’t the only one. A low growl emerged beside her as Finn picked up the foreign scent.

“Mislabeled the sign,” a cocky voice called from the door. “Should read ‘Doggie Daycare’ with the number of pups packed into this place.” The man’s eyes twinkled at his less-than-funny joke, and an amused grin spread on his face. He walked in with a graceful stride, the liquidity of his movements betraying his kind, as if a cat could ever disguise its nature.

Sierra Kanoska fought hard for her position as wolf alpha of the Red Rock pack, and intruders in her territory receive the full brunt of what her claws, fangs, and smarts can accomplish. So when Dax Williams, de facto alpha of the Silver Springs pack, pays an unwelcome visit, Sierra’s ready to toss him out. However, the man’s in a tough spot. The pack elders sabotaged his fight for alpha against his brother, driving him from his lands. Sierra hates underhanded moves like that, so she agrees on an alliance.

As they work together, she witnesses an alpha who wants to do right by his pack, not just the cocky wiseass she first met. Their growing attraction blazes hot, but the moment she and Dax lock lips, a mating bond emerges. Sierra sure as hell isn’t ready to share that intimate connection with a stranger, and the thought of forever sends Dax running.

Before they can talk, the Tribe commanding the East Coast shifters arrives to settle the dispute. Dax and his brother’s punishment for their pack’s civil war is a free-for-all on their lands. Not only does he have to defeat his brother, but any challenger in the region. Despite Dax and Sierra’s initial resistance, his wily charm relaxes her control-freak tendencies while her steadfast support bolsters his strength. Yet every new opponent places their newfound relationship under siege—one misstep, one wrong blow in the ring, and Dax could leave in a bodybag.