What if Bebe Stays with Steven? 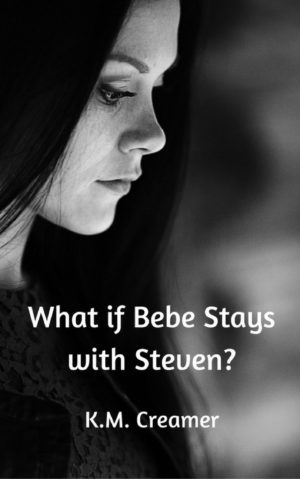 “Okay, you can leave now,” Bebe said, making a mental note to throw the roses in the trash the first chance she got. “No, wait!” Steven said. “Come to breakfast with me,” he said. She noticed dully that he was not asking, he was commanding. Like the shit that he was.

“No. I don’t think so,” Bebe said and continued her ascent. “Come on. We’ll go get coffee then, and just talk. Just for an hour. Come on,” he said again. Maybe Bebe didn’t have a soft spot for him so much at the moment, but she sure did have a soft spot for coffee. She would have killed for coffee right then. Maybe this is a great time to go get coffee, she thought. A killer mood was the perfect mood for dealing with him.

“Okay. One hour. I want to be back here in one hour,” she told him. “Great. I promise. Let’s go,” he said. Bebe thought his promises weren’t worth a cent and wanted to tell him so, but she held back. Why show all her cards? Why let him know how much she was hating him? Go, get the coffee, and get rid of him. Give him the closure that he was so obviously coveting. And then send him on his way, so she could begin her new, single, celibate, solitary life. She would have the satisfaction of telling him to go fuck himself and have coffee, too!  All before noon!

Her mood began to brighten up. Just as she was wondering where they should go, he said, “We’ll go to the Dunkin Donuts,” and to keep the conversation to a minimum, she nodded okay. She loved Dunkin Donuts coffee. It would be the perfect yin and yang: loved Dunkin, hated him.

To his credit, he didn’t try to talk on the way. They drove in silence. He must have realized that the more he talked, the less she listened to him. Besides, it was a quick ride. In ten minutes they were sliding into a space right in front of the store. Bebe noticed that it was a handicapped parking spot. Last week, she would have commented on it. Yesterday, even, she would have raised an eyebrow. Today, now that she knew what she knew, she said nothing, secretly hoping there was a big, fat ticket on his windshield when he got back. Ha! She thought, cheered, but then she remembered that his family and the police were all BFF’s. Fat ticket? Fat chance. Oh, well. She’d be done with all that drama in the time it took to down a large, black French Vanilla coffee. And maybe a muffin. It should cost him, she thought.

With her plan made, she didn’t wait for him to come around and open her door. That was when they were a couple. Now that they were uncoupled, she could open her own freakin’ door. He noticed, of course, but wisely kept his mouth shut. He did manage to hold the door open for her to enter the store, but so what? He would have done that for a stranger. Nothing intimate about that gesture.

Once inside, they got their order at the counter and found a table. She sat across from him, sipping her coffee, still silent. Seething. Let him dig his grave with his mouth, she thought. There was nothing he could say to her now, not after that performance last night, that would make her change her mind. Nothing would make her stay with Steven. Of that, she was sure.

Except, that there was.

What if you stay when you know you should go? Bebe ignores her intuition at her own peril, and the longer she stays, the harder it is to go. When Steven’s threats extend to her family, she finally makes a decision. Will she live to regret it?