Audiobook review: How to Date Your Dragon 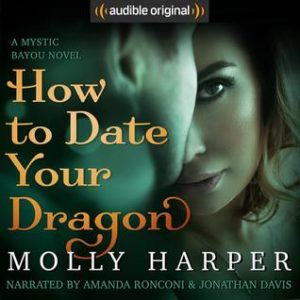 How to Date Your Dragon is the initial offering in Ms. Harper’s new audiobook-first Mystic Bayou series. The book takes place in modern-day Louisiana, in a world where a limited number of humans know about the existence of the paranormal beings who live among us. The League for Interspecies Cooperation is one group who knows about the paras and is preparing for the day everyone else finds out.

Jillian is sent to the town of Mystic Bayou by the League to study how different paranormal species and humans coexist peacefully, and catalog it so that it can be used as a guide for future towns once the general human population discovers paranormals exist. She is sent at the last minute because her boss was injured in an accident involving a unicorn. The town’s folk are generally welcoming of Jillian, most especially the mayor, Zed who is a bear shifter, and Jillian’s love interest: Bael, who is a dragon shifter and the sheriff. However, after she arrives, a few of the paranormals are murdered, putting Jillian in the middle of a criminal investigation.

Overall, I really enjoyed listening to How to Date Your Dragon. It’s trademark Molly Harper humor, but a little less snarky. Jillian is smart and kind; she can be precious and darling, but also a firecracker. And Bael is a perfect match for her (and she for him). Bael is gruff, but he cares about the residents of Mystic Bayou, something unique among dragons, making him a bit of an outcast in his family. I love how Bael just jumps headfirst into his feelings for Jillian, even if she’s a bit reluctant.

In addition to the romance, the book features a solid mystery. Residents are being brutally murdered, something that hasn’t happened in the small town in years. I like how Bael and Jillian work side by side to solve the crimes. And then there is the aspect of the rift, about which we learned very little, but is exciting, and I hope we get more soon.

The narration from Ms. Ronconi is exactly what I’ve come to expect. She hits all the southern dialects and seems to alter her voice just right to fit high-speed Jillian and more laid-back Bael and Jed. I started at 1.25x speed since that’s what I always use for her narration; however, I needed to speed it up for Mr. Davis, and then just kept it at 1.5x speed. Mr. Davis’s narration took a little getting used to, probably because I’m so used to Ms. Ronconi going solo. I liked his voice for Zed and most of the males. The females are a bit soft. My biggest issue with his performance was the high volume of production errors where it is evident his parts were re-dubbed after the fact. It became very annoying.

In the end, I loved listening to How to Date Your Dragon and cannot wait to see what Ms. Harper does with this wonderful new series.

My Rating: A
AR narration: A
JD narration: B+ / B- (the production issues are the only thing bringing down his rating)

Concerned that technology is about to chase mythological creatures out into the open (how long can Sasquatch stay hidden from Google maps?), the League for Interspecies Cooperation is sending Jillian to Louisiana on a fact-finding mission. While the League hopes to hold on to secrecy for a little bit longer, they’re preparing for the worst in terms of human reactions. They need a plan, so they look to Mystic Bayou, a tiny town hidden in the swamp where humans and supernatural residents have been living in harmony for generations. Mermaids and gator shifters swim in the bayou. Spirit bottles light the front porches after twilight. Dragons light the fires under crayfish pots.

Jillian’s first assignment for the League could be her last. Mystic Bayou is wary of outsiders, and she has difficulty getting locals to talk to her. And she can’t get the get gruff town sheriff, Bael Boone, off of her back or out of her mind. Bael is the finest male specimen she’s seen in a long time, even though he might not be human. Soon their flirtation is hotter than a dragon’s breath, which Bael just might turn out to be…