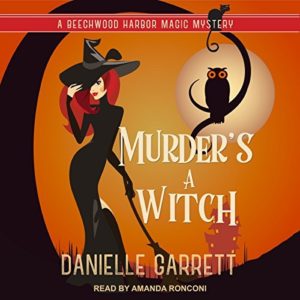 Holly, a powerful witch, has been tossed from the Haven, a secret system of living for paranormals. She’s been placed in a communal home for displaced paras, living in the small town of Beechwood Harbor. Working at a coffee shop to make ends meet, Holly is shocked when she shows up for work only to find her grumpy boss Peg murdered in the back alley. When her best friend is named as the primary suspect, Holly uses her witchy ways to get to the bottom of this mystery.

Murder’s a Witch is a fun, entertaining story. This is the first time I’ve selected an audiobook primarily because of the narrator, and I’m glad I did. I enjoyed the small-town, cozy paranormal mystery with a slight blossom of romance. Even though at first, I found the house infighting annoying, and the characters a bit over-the-top, I grew to like the residents of Beechwood Harbor.

Holly is a bit of a mess, and she has secrets, of which we learned very little. Hopefully those answers will come in time, but the immediate mystery of who killed Peg was engrossing. I liked listening as Holly worked to put all of the pieces together. I loved the light-hearted nature of the story, watching friendships develop, seeing Adam’s genuine interest in Holly, etc. Some of the storylines were a bit cheesy – like the vampiress beauty queen, but mostly it is a good mix of fun.

As I mentioned, I picked up this story because, while it looked interesting, the narrator is one of my favorites: Amanda Ronconi. She does a wonderful job with the story, creating and maintaining unique and fitting voices for each character. Ms. Ronconi succeeds with the quirky, first-person female lead, and Holly is no exception. I’ve become familiar with most of her voices, yet never did I confuse Murder’s a Witch with another story.

In the end, I enjoyed my first visit to Beechwood Harbor. I like that there is still a lot of unknown around Holly, like why she was kicked out of the Haven system, and with town newcomer, Nick… I feel like there is more to him than meets the eye. I will definitely pick up future titles of the Beechwood Harbor Magic Mysteries with Amanda Ronconi narrating.

My Rating: B
Narration: B+

Holly Boldt has a secret.

Well, technically, she has lots of them. After a scandal uproots her entire life, she is forced to relocate to a halfway house for displaced paranormals. It’s her last shot for a fresh start. But keeping secrets isn’t easy in a town that goes through gossip faster than tissue paper, even for a powerful witch.

When a grisly murder rocks the small town of Beechwood Harbor, Holly finds herself unwillingly entangled in the investigation. With everyone watching, Holly must solve the case before she’s forced to abandon her new-found home and live life as a witch on the run. But with a paranormal investigator tailing her every move, a civil war brewing between her vampire and shifter roommates, and her ghostly landlord on the edge of a breakdown, she can barely think in complete sentences. How is she supposed to track down a murderer?

Holly has to make it work, or risk losing everything … again.