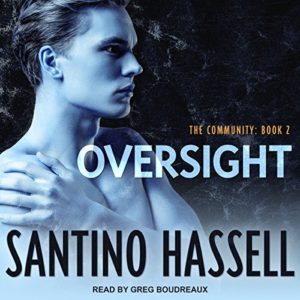 Entitled, gorgeous, and, (somewhat) oblivious, Holden Payne has been an outspoken champion of The Community all his life. Despite his contentious relationship with his father (who happens to be the most powerful of the founders), his devotion to The Community’s ostensible mission to help “lost” psys who flock to his nightclub in NYC is his greatest source of pride. Or, at least it was, until a series of disappearances and murders occurred on his watch, exposing a more sinister agenda at work. Now, inexplicably the focus of an investigation by the very group that raised him, Holden has been given a babysitter in the form of a socially inept, emotionally vacant—and gorgeous—lumbersexual named Sixtus Rossi.

Immune to Holden’s usual charms and psychic abilities, Sixtus presents a serious problem—especially since Holden’s attraction to the man becomes more undeniable by the day. With the discovery of another faction working against The Community straining his loyalties, getting closer to Sixtus could either lead to Holden’s downfall or finally allow him to experience the only real love he’s ever known.

Once again, Mr. Boudreaux seems to have put a lot of thought and effort into his performance of Oversight, making both Holden’s cultured purr and Sixtus’ deadpan Bronx accent believable and persuasive. One of the most unique things about Six is his inability to process—or express—emotions based on typical cues. As such, he doesn’t have much of a filter, and I found this narrator’s take on the fact particularly amusing as well as more touching than I might have otherwise. Additionally, the accents reintroduced with return of other characters—Nate’s Texas twang, in particular—could have been tempered in deference to those of the main characters, but that’s not the case here. Each remains distinct and vibrant throughout, providing additional strength to the already solid reading.

While I enjoyed this version of Oversight tremendously, I think that reading the book first made me fonder of the overall production than if I’d listened to the audio rendition on its own. Given that this is due to personal preference as much as any other reason, I highly recommend both Insight and Oversight audiobooks to fans of the series and new readers alike. I felt that Mr. Boudreaux’s performance fits the narrative extremely well, and I was especially happy to get thoroughly caught up in the story all over again as the chapters flew by. There’s still one more audiobook in The Community series to go, and, with everything on a collision course, I have no doubt that it will just as delightful, if not more so.

Holden Payne has it all . . . or so he thinks. As heir to the founder of the Community—an organization that finds, protects, and manages psychics—he’s rich, powerful, and treated like royalty. But after a series of disappearances and murders rock the Community, he’s branded the fall guy for the scandal and saddled with a babysitter.

Sixtus Rossi is a broad-shouldered, tattooed lumbersexual with a man bun and a steely gaze. He’s also an invulnerable—supposedly impervious to both psychic abilities and Holden’s charms. It’s a claim Holden takes as a challenge. Especially if sleeping with Six may help him learn whether the Community had more to do with the disappearances than they claimed.

As Holden uncovers the truth, he also finds himself getting in deep with the man sent to watch him. His plan to seduce Six for information leads to a connection so intense that some of Six’s shields come crashing down. And with that comes a frightening realization: Holden has to either stand by the Community that has given him everything, or abandon his old life to protect the people he loves.