3/10/2018 Edited to Add: Please note, this review was written and posted prior to the occurrences brought to light in recent days (https://thesaltminers.tumblr.com/post/171680546960/the-santino-hassell-debacle). The book was read and reviewed in good faith and as presented at the time. The posting of this review in no way condones the actions of author. 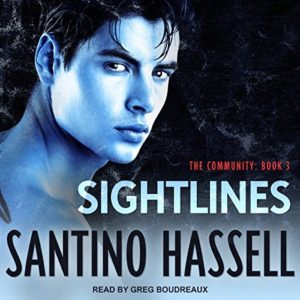 In this third, and final, addition to The Community series, author Santino Hassell brings all the conflict and suspense that has been building since the beginning to a compelling and satisfying end. As both prize and project, Chase has been the realization of the darkest machinations of the Community itself his entire life, as well as the common thread between all the other characters we’ve gotten to know so far. Additionally, Chase and Elijah have been favorites, if captivating unknowns, throughout the many twists and turns of the series, so I thought it especially fitting that this part of the arc is theirs.

While I had a little difficulty keeping track of how much time passes in the very beginning of Sightlines (which is fitting, since time is a means of control on the farm), the speed with which the plot starts unfolding takes effect fairly early in the narrative. What’s been done to Chase all his life is completely abhorrent, and I found that hearing his perspective in the audiobook version was as devastating as it was during my initial reading of the story. Elijah, too, has unhealed wounds, inflicted by people who should have loved him, making his hidden strengths the inverse—yet perfectly matched—answer to Chase’s necessarily unacknowledged need for support.

Narrator Greg Boudreaux likewise sees the series through with just as solid a performance as when he began. With all the characters reuniting for much of the story, eventually leading to an emotionally fraught and fast-paced conclusion, his ability to maintain each distinctive voice was more impressive than ever. His unflinching portrayal of the sometimes wildly shifting emotions of the characters was equally noteworthy, and he remains one of my favorite performers.

Although The Community series has been a departure from most of Mr. Hassell’s other stories I’ve read, I believe it is an indisputably successful one. Common themes such as greed and fear are explored in an entirely different way in Sightlines, along with the realization that sometimes there is a disappointingly short distance between good intentions and corruption—and that power is something that ought to inspire wariness, rather than being coveted.

As was the case with the ebook/print copy (I bought all three for my bookshelf), I liked the Sightlines audiobook very much. I’ve come to care about these characters a great deal, and Mr. Boudreaux’s performance reinforced that conviction, along with many of the other imaginings generated during my initial reading, rather than diminishing them. In the end, I recommend all The Community stories without hesitation, regardless of format, and am looking forward to hearing them all again soon.

Chase Payne is a walking contradiction. He’s the most powerful psychic in the Community, but the least respected. He’s the son of the Community’s founder, but with his tattoo sleeves and abrasive attitude, he’s nothing like his charismatic family. No one knows what to make of him, which is how he wound up locked in a cell on the Farm yet again. But this time, the only man he’s ever loved is there too.

Elijah Estrella was used to being the sassy sidekick who fooled around with Chase for fun. But that was before he realized the Community wasn’t the haven he’d believed in and Chase was the only person who’d ever truly tried to protect him. Now they’re surrounded by people who want to turn them against their friends, and the only way out is to pretend the brainwashing works.

With Chase playing the role of a tyrant’s second-in-command, and Elijah acting like Chase’s mindless sex toy, they risk everything by plotting a daring escape. In the end, it’s only their psychic abilities, fueled by their growing love for each other, that will allow them to take the Community down once and for all.