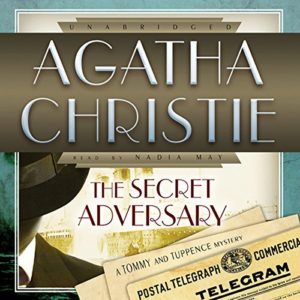 With the release of the new Kenneth Bragnah Murder on the Orient Express movie, the nostalgia I felt over watching a remake of one of my favorite Agatha Christie mysteries has spurred me to finally read one.  All of my experiences of Agatha Christie has been via movies or very short stories.  There is something to be said to listening to a classic novel and reliving it all over again – learning something new and finding out what may have been left out of the film version.  As I wait for the more mainstream Agatha Christie mysteries (Hercule Poriot and Miss Marple) to become available at my library, I discovered a mystery series I’d never heard of – Tommy and Tuppence Mystery series.  Beautifully narrated by Nadia May, I fell in love with the antics of Tuppence and the solidarity of Tommy.

Tommy and Tuppence are old friends.  They grew up together and have stayed in touch over the long years.  In their (I’d guess) mid-twenties, they are finding it difficult to maintain a good job now that the war (WWI) has ended.  As they catch up since their last meeting, they decide to start the New Adventures Limited – where they would advertise that they would do anything if the price is right.  Before they are even able to put their advertisement in the Times, a gentleman overhears and offers Tuppence a job.  Thus begins their first gig in their new entrepreneurial endeavor.

Tuppence was a breath of fresh air.  I enjoyed her plucky optimism and exuberant spirit.  She balances the more cautious and thorough nature of Tommy.  However, they are both exceedingly bright and clever.  Tommy is exceedingly quick witted and was surprisingly quick when sleuthing out clues or trying to escape the henchmen.  Tuppence is dogged and determined, willing to do anything to sleuth out the clues.  It was delightful to follow their bumbling through this case of murder, espionage, and potential political upheaval.  All woven intricately by the mysterious “Mr. Brown”, an elusive character not unlike Keyser Soze who seems to be the puppet master at the center of this web of deceit.  With the addition of several other characters, Ms. Christie did an excellent job of allowing suspicion to fall on any of the supporting characters.

As stated before, I enjoyed Ms. May’s performance of this classic mystery novel.  She did an excellent job in modulating her voice into the various characters.  Most especially, I loved how she captured the contrasting personalities of Tommy and Tuppence.  I look forward to listening to her again.

For those that enjoy classic British mysteries, save a penny and look to your local library to see what offerings in audio they have of some of the most noted mysteries in history.  I highly recommend it as you may, like me, discover new characters and series by authors you thought you knew.

The girl in the photograph has been missing for five years. Neither her body nor the secret documents she was carrying have ever been found. Now, post-war England’s economic recovery depends on finding her and getting the papers back. But the two young Brits working undercover for the ministry know only that her name was Jane Finn, and the only photo of her is in the hands of her rich American cousin.

They don’t know yet about a mysterious and ruthless man called “Mr. Brown,” or the beautiful but sinister older woman who knows all about Jane Finn…and therefore must die.