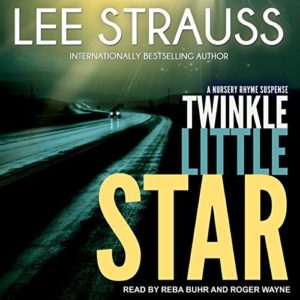 Twinkle Little Star is another gripping thriller in the Nursery Rhyme Suspense series.  I continue to truly enjoy this sci-fi mystery series as I never know what to expect next.

Just when you think everything has gone back to normal…well as normal as it can be for Sage realizing too late she is in love with Marlow, that school and life move on even when you are still mourning your best friend’s death, and your roommate isn’t the bestie she acts like.  Then Sage accidentally kills another student.  She was driving (while a bit emotional) and a woman just suddenly appears in front of her car.  As Marlow arrives on the scene shortly after with Sage’s brother, he discovers that this is not a straight forward case of vehicular manslaughter.  Picking up what he thought was Sage’s phone; he is transported to another location. After glimpsing someone in the shadows he is suddenly back at the scene of the accident.  Was this woman accidentally sent to the wrong location at the wrong time or is something more sinister going on?

I am again surprised at how quickly I inhaled the latest Nursery Rhyme Suspense story.  Marlow and Sage’s geeky interests and intellectual endeavors are charmingly addictive.  The competition for the New Scientists Innovation Award was a fascinating element to the plot.  I enjoyed how it brought Marlow and Sage back together and highlighted the tension between Marlow and Dakota’s new relationship.  Marlow brining his father into the mystery revealed even more secrets and reasons behind the connection Sage and Marlow seem to have.  I really enjoyed how the plot flowed and twisted as the mystery was solved but more questions came to light.

I continue to enjoy the dual narrators and can’t imagine listening to this story without them.  They are becoming the true voices of Marlow and Sage.  The personality of the characters as well as the inflections they provide in their performance assists in bringing Twinkle Little Star to life.  In many ways, I feel that this series should only be heard rather than read.  Both narrators continue to expand and bring this rich and intriguing world to life.

I continue to enjoy the weird adventures of Marlow and Sage and look forward to the next one.  The experiences that Marlow has survived so far in this series, it would seem that they should be starting to take a toll on him, especially with the course of the plot of Twinkle Little Star.  Combined this with the revelations at the conclusion of the story, I eagerly await the next audio-installment of the Nursery Rhyme Suspense series.

My Ratings:
Story: A
Narration: A
Overall: A

When you’re dead wrong. Sage Farrell regrets missing her chance to be more than friends with Marlow Henry. But being alone and lonely in her sophomore year at Detroit University is the least of her problems. On a dark, quiet forest road something jumps in front of her truck, literally from out of nowhere. It wasn’t a deer or elk that she hit, but the beautiful media star Crystal Morrisette. Marlow and Sage are pulled into yet another unexplainable mystery. Who killed the media star and how did she just appear out of thin air? And how are they going to prove to the police that Sage is innocent of this crime? There’s a madman on campus getting crazier by the day and now his sight is set on Sage and Marlow. They have to put their heart issues aside until they find a way to stop him, because there’s no sense falling in love if you’re dead.