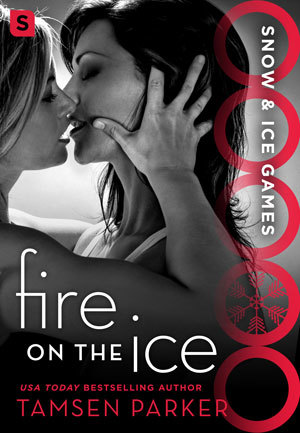 Blaze and Maisy shared three days of debauchery at the SIGs four years ago, so good that neither could forget. But it was just for fun, so they never sought each other, until they both arrive in Denver for another round of Snow and Ice Games. Picking up right where they left off, the pair shares a greedy lust, spending almost all their private time together. But each knows it’s only for the duration of the games, and real feelings aren’t an issue… right?

Fire on the Ice is the fourth tale to come from the Snow and Ice Games series. This time around, the story features Maisy, the shy, mostly closeted figure skater and Blaze, the loud and proud, polymorous short track speed skater. Blaze and Maisy are polar opposites, yet so much the same. They both work hard for the sport they love; never in the top but always close. They both are sexually insatiable and enjoy being with one another. But whereas Blaze basks in the public eye and loves attention, Maisy shies away, hoping to stay off the radar.

I liked the pairing of Blaze and Maisy. Both have to learn to be better versions of themselves to make the relationship work. They both grow and give, and I enjoyed watching how their union developed over the short, but intense time they spent together. They both make missteps, but instead of these mistakes ending things, they help to bring the couple closer together. I also appreciate the author’s focus on the importance of strong and open communication being the key to a solid relationship.

The only real negative for me was the shear volume of graphic sex. I didn’t ever think I’d write those words, but honestly, after a while, I just skimmed the scenes because I wanted more of the story outside the bedroom. However, the scenes are not gratuitous because the couple’s sexual nature is important to the story. The sex scenes are used to show the common bond and ultimate trust each woman has with/for the other. They are used to show how the pair grows increasingly closer and intimate. But for me, it got to be too much and overshadowed the rest of the story.

Overall, Fire on the Ice is a solid story and sexy romance. I love how strongly Blaze and Maisy support one another. How mistakes are made but forgiveness is granted. How love is stronger than outside circumstances. I love seeing both grow and mature, slaying inner demons along the way.

Blaze Bellamy is the bad girl of the short track speed skating world. Looking like a roller derby bruiser when she’s not in her Team USA uniform, she’s an unlikely American heroine. She’s got a punk attitude to match her provocative dress and her dyed hair, and she’s determined to get onto the front pages of the papers regardless of how she has to do it.

Maisy Harper is the workhorse of the Canadian women’s figure skating team. Serious, modest, and above all, polite, Maisy would prefer to win her victory on the ice rather than in the press, and is exasperated by Blaze’s antics. When she’s not lusting after her anyway. After they both failed to make the medal podium at the last Snow and Ice Games, they drowned themselves in gin—and each other.

Despite their hookup being drunken, they both harbor fond memories of their night together and are keen for a repeat. But they’ve got different ways of going about getting what they want, and Blaze’s willingness to go to any lengths for the spotlight could ruin any chance she has with Maisy.