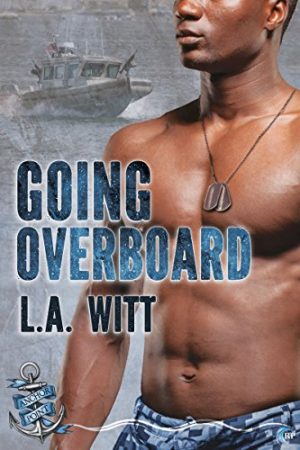 Having been born into a Navy family, MA2 Chris Ingram always knew that following in his parents’ footsteps was what he wanted to do. Even though being a coxswain in charge of a ship and progressing through the different rates has made up the last fifteen years of his life, the high-year tenure rules in place mean that he’s running out of time to advance. At least he’s not alone, his best friend (and long-time crush), Dalton, being in exactly the same situation. But, coming out just isn’t in the cards right now—that is, until Chris almost loses Dalton for good.

While he may have joined the Navy to get away from his life in Nebraska, Dalton Taylor knew that becoming a Sailor was his calling. Being out and proud hasn’t always been easy, but with the repeal of DADT he doesn’t have to hide, at least. Serving with his friend Chris makes his assignment to NAS Adams just about as perfect as he could have hoped for. Still, nearly dying in a boating accident upends all of Dalton’s best-laid plans, and wanting Chris may not be a secret he can keep for much longe—except that losing his heart to “straight guy” Chris will hurt far more than anything else Dalton’s ever known.

Having read all but one of the Anchor Point stories with somewhat mixed opinions, I have to say that Going Overboard is probably my favorite so far. While I had a little trouble accepting that Dalton had no idea at all about Chris’s sexuality after so many years of being best friends, I wanted them to be happy very much. Additionally, the fight that they both have to make under the circumstances surrounding the accident that nearly killed Dalton was highly engaging, and made the bad guys involved extremely easy to hate.

I liked Chris and Dalton as a couple very much. A lot is made later on about how both men feel like they’ve been together longer than the calendar suggests, and, in this case, that rings true in the narrative. From the beginning their friendship seemed to be not only solid, but positively drenched in “if I could I would” longing. The author makes it clear that this isn’t insta-love, but something far stronger which culminates in a sexual chemistry that seems to be more of a relief that they’re both right than achieving a goal.

Something that might be familiar to readers of the previous stories is the threat posed to the central relationship by the Navy itself. While certain regulations have been an unfair impediment before, the ones imposed by “Big Navy” on Dalton and Chris seem positively evil. Even more dangerous in Going Overboard are the favoritism, threats, sinister manipulations, and coerced silence employed by their superior officer. I couldn’t help but be livid on the men’s behalf, especially when pondering how easily those same tactics could be used in real-life situations. Fortunately for Chris and Dalton, Senior Chief Curtis (from Rank & File) and Chief Jackson (from Chief’s Mess) provide much needed balance and support.

Overall, I think the Anchor Point series continues to grow stronger with each new addition, and, hopefully, Going Overboard is a good indicator of that trend continuing. Chris and Dalton’s relationship was filled with mutual respect and believable intimacy, and I enjoyed being on their side all the way through the narrative. Although there are several stories still to come, I’m especially excited about the next story, half the proceeds of which will also go to an excellent cause.

It turns out love and sex come easy when you’re falling for your best friend.

Second-class petty officers Dalton Taylor and Chris Ingram have been best friends since coxswain’s school. Now they’re stationed together in the Harbor Patrol Unit of NAS Adams. They’re content as friends, but secretly, they both ache for more. Neither makes a move, though; while Dalton is out and proud, Chris is closeted—even from his best friend.

Then another coxswain’s negligence nearly drowns Dalton. After a taste of how easily they could lose each other, neither man can keep his feelings hidden anymore, and it turns out love and sex come easy when you’re falling for your best friend.

Things aren’t just heating up between the friends-turned-lovers, though. The Navy is investigating the accident, and the Harbor Patrol chief isn’t going to let his star coxswain go down for dereliction of duty, even if saving him means throwing Dalton under the bus.

As the threats and gaslighting pile up, Chris and Dalton need each other more than ever—as shipmates, friends, and lovers. But if their chief prevails, the only way they can save their careers is to let each other go.