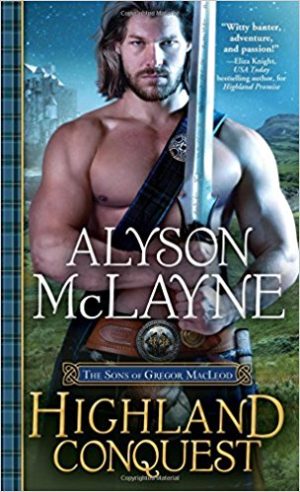 I haven’t read a historical romance in a while so I didn’t go in over-saturated with the genre.  Highland Conquest (originally titled Highland Bride) was a fun read. In fact, it makes me sad I missed the first one in the Sons of Gregor MacLeod series.  I’m going to have to go back and pick it up before the third comes out. McLayne plans five books in this series, following five boys, fostered by Gregor MacLeod and raised as brothers to strapping warriors and leaders.

Even though McLayne is a solid, award-winning author, the Sons of Gregor MacLeod series is her first foray into historical romance.  She hits it out of the park with sexy, feisty, and strong characters—especially Amber MacPhearson.  She’s the kind of loyal leading lady you’re sure you’d be best friends with in real life. Amber is opinionated and will do anything she can to protect her clan from the evil Laird Murray. After being stalked by Murray since she was seventeen, she has determined that she will never marry.  Enter Lachlan MacKay…

Lachlan doesn’t want to marry either, but is drawn to Amber even before he knows who she is or what she means to him.  His pursuit of Murray, who murdered his brother, leads him to Amber.  Together they scheme and work for his capture.  Together they have amazing chemistry—although in a refreshing approach, they don’t consummate their relationship until they’re actually married. Of course there’s a whole lotta foreplay before that.

The banter is smart and even amusing.  I only stumbled across one line that was so out of character that I marked it.  After circumstances require Amber cut her famous copper locks, this big, kilt wearing warrior says, “Your eyes look wider, and your cheeks…they’re so high.“ Whaaaaat?!  No matter how aware of her he was, there’s no way that though would have even crossed the consciousness of a big, burly Scotsman. But that was really my only criticism.  The rest of the story flowed and reached a satisfactory conclusion.

The cover art for this series, while typical with men in kilts—is some very fine men in kilts that are not overly stylized.  I would have loved to have been a fly on the wall during that photo shoot… Grab this one up!

Laird Lachlan MacKay never planned on leading his clan, but when his older brother was murdered, he was left with no choice. His vow to avenge his brother has led him to the MacPherson clan―and their bewitching healer, Amber.

Amber MacPherson is desperate. Dressed as a boy to escape her clan’s treacherous leader, she runs right into Lachlan―who orders her detained. At first she causes him nothing but frustration, especially when she blackmails him into helping her clan. But when she’s threatened by the same man who murdered his brother, Lachlan will do whatever it takes to keep her safe―and by his side.