Posted February 28, 2018 by B. in Rating B, Reviews, Sci-Fi or Fantasy Fiction, Urban Fantasy Tags: Ace Publishing, Anne Bishop, Bs-review, The Others series, World of the Others series 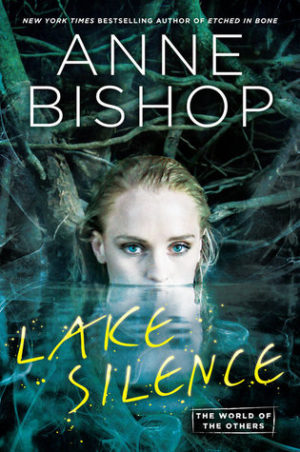 As a reader who mostly enjoyed the original five stories of The Others, I was both hopeful and concerned about the direction the author might take as the series continued. Having finished Lake Silence, I still feel somewhat conflicted, even though there was quite a lot of time spent establishing the new environment and characters that will make up this part of the same universe. The glimpses of the wild country that were given before were both distant and brief, and there were even fewer details about what life would actually be like in small human (or intuit) villages, like Sproing.

Overall, I liked Vicki quite a lot. She’s strong, clever, has an internally snarky—if slightly manic—sense of humor that I appreciated, and does her best to deal honestly with everyone around her. She’s also survived an awful divorce from an unrepentantly loathsome and emotionally abusive scumbag whose arrogance is as inexplicable as it is intolerable. With that in mind, I found her wariness of men, in general, to be completely understandable, but I was impressed that her acknowledgement of her own limitations was rooted more in her ability to be logical and rational than any perceived powerlessness.

And that’s where parts of the narrative became problematic for me. Even though they have Vicki’s best interests at heart, I couldn’t shake the feeling that the “good guys” in the story—with the exception of Julian Farrow—“handled” her a lot during the course of the story. Vicki does have a moment or two of somewhat childish lashing out, but these instances are few when compared to her deliberate internal consideration of each increasingly alarming situation she finds herself in. Most often, she readily accepts that she needs help, and willingly lets her allies (nearly all men) take the lead. The Others, in particular, have never tried to assist any human, especially an “emotionally-scarred” one, but I think it would have been reasonable (and beneficial to Vicki in the long run) to treat her as a fully aware participant from the beginning, rather than a helpless victim.

As mentioned above, Julian, one of my favorite characters in Lake Silence, points out that very problem fairly early in the story. As an Intuit and former policeman, not to mention the ties he has to the terra indigene and humans alike, he’s a key element throughout the narrative, and one I came to respect a great deal. Other characters I liked tremendously included Aggie and the other Crows, Ineke Xavier, Cougar and Conan, the Lady of the Lake—and the Sproingers.

Despite a few issues that made it difficult for me to become completely engaged in Lake Silence, I think it has significant potential as a continuation of the world of The Others. While none make a direct appearance in this story, the residents of the Lakeside Courtyard/Ferryman’s Landing are still present in other ways, which I was very happy about—though I’d love to see even more of them. I also strongly recommend reading the other books in the series first, since that prior knowledge is necessary to understand the rules that govern this narrative and its characters. Given the previous stories’ focus on larger human cities, Lake Silence is a new beginning, and it’s something I’ll keep in mind as more are written in the future.

Human laws do not apply in the territory controlled by the Others—vampires, shapeshifters, and paranormal beings even more deadly. And this is a fact that humans should never, ever forget . . .

After her divorce, Vicki DeVine took over a rustic resort near Lake Silence, in a human town that is not human controlled. Towns like Vicki’s have no distance from the Others, the dominant predators that rule most of the land and all of the water throughout the world. And when a place has no boundaries, you never really know what’s out there watching you.

Vicki was hoping to find a new career and a new life. But when her lodger, Aggie Crowe—one of the shapeshifting Others—discovers a dead body, Vicki finds trouble instead. The detectives want to pin the man’s death on her, despite the evidence that nothing human could have killed the victim. As Vicki and her friends search for answers, things get dangerous—and it’ll take everything they have to stay alive.