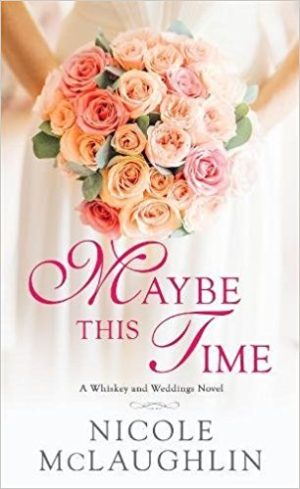 Teenagers, almost all of them, go to high school.  It’s unfortunate that Twilight has ruined high school as a setting for too many authors. I confess, when I was introduced to teenage Jen MacKenzie and TJ Laughlin and the two had a crush on each other, but each thought the other one hated them, and then had to work together on a school project…yeah, Twilight.  It’s not fair, but it’s there.  Maybe in another decade my mind won’t go there immediately.  To McLauglin’s credit, I forgot about Twilight as soon as she continued to develop these characters, especially as adults.  I liked them.  I also liked that we got to skip over the fifteen years they spent after high school yearning for each other, but never acting on it.  So the reader arrives on the scene when they finally decide to do something.

Maybe This Time is the second installment in the Whiskey and Wedding series. TJ is one of the owners of the boutique Stag Distillery.  Jen works for him as a bartender and temporary receptionist.  Her out-going personality makes her a natural at customer service, but she can be grumpy and bristly in private.  TJ loves having her around as well as what she can do for his business.  Unfortunately, Jen’s heart is in the performing arts and doesn’t plan to make a career out of bartending. He’s from money, she’s from the other side of the tracks.  They shouldn’t work which is why they don’t act on their mutual attraction for so long.  Once they do come together, however, they move very quickly.  Circumstances in Jen’s life force them to move even faster than she would like, but TJ is there going head to head with her to get the relationship he wants.

Overall, it’s a sweet, contemporary romance between what should have been high school sweethearts.  The ending wraps up too quickly for me, but that’s kind of the definition of chick lit.  TJ makes a sweeping declaration that would probably play well in a Larry Levinson movie, but in the book where we have time and space, it felt insincere—his only moment that felt that way.  That’s not too grievous in this category of literature, but it’s not the only issue I had which brought down my overall enjoyment of the novel.

One of the things Jen and TJ have is common is that they don’t have especially likable parents.  Through their dialog and actions, McLaughlin lets us know that these are not the kind of people you look forward to visiting for the holidays.  Dutifully, I didn’t like any of them even though their flaws, especially in Jen’s mother, seem to be somewhat justified. The parents in both cases move from unloveable to warm too quickly.  As much as we wanted it for Jen and TJ, the about face left me with whiplash rather than relief. In fact, every change of significance seems to be reactionary and precipitated by a major event, rather than the gradual growth that comes of maturity.

Finally, it was odd that McLaughlin named one of her main characters “Laughlin.”  There’s certainly no rule against it like not  ending a sentence with a preposition, it just feels uncreative.  I had the same issue with Cassandra Clare, author of the Mortal Instruments series, who named her main character Clary.

I did like Maybe This Time enough that I’m looking forward to the next book in the series, Maybe For You.  Maybe it will be for me?

Jen Mackenzie has been knocked down more than a few times, but she always gets up and makes sure she has the last word. It’s the reason she now considers herself equal parts self-sufficient and free-spirit. But since losing her job and trying to help her mother beat cancer, real life―and her occasional careless choices―have begun to catch up with her. Her one saving grace: The Stag, a boutique distillery that has become Kansas City’s go-to wedding venue. The only catch: One of the owners, TJ Laughlin, happens to be the one man who somehow manages to make Jen feel inadequate.

TJ has secretly had a thing for Jen since high school. Now, as her new boss, it’s a daily struggle between revealing his feelings and wringing her beautiful neck. Only one thing is for certain: he can’t stand idly by and watch the woman he cares for struggle. She may be convinced that accepting TJ’s help is a weakness. But all he sees in Jen is beauty and strength, inside and out. As things finally heat up between them, can TJ find a way to convince Jen that love is about give and take―and having it all, together?