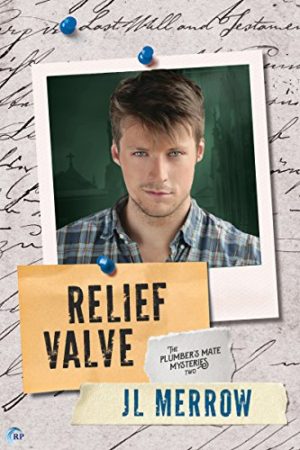 Still recovering from the last case he helped solve, as well as trying to settle into his new relationship with Phil Morrison (a private investigator and former bully), psychically-gifted plumber Tom Paretski could really go for some quiet time and a pint or two at his favorite pub. But, between his best friend’s engagement, the death of a family friend, and his sister’s poisoning (at her own engagement party, no less), he’s not likely to find peace anytime soon. Good thing the pints are a viable option, at least.

As much as I liked Pressure Head, the first in the series, I had a truly excellent time reading this story. Despite the grim circumstances surrounding the darker aspects of the narrative, I thought Relief Valve was downright hilarious. Tom’s at his best when he finds himself trapped within the failings of etiquette in the face of death, literary duplicity, and romance, and I couldn’t help snickering and cackling all the way through at his expense. I even guiltily found his discomfort with regards to his own affections nearly priceless.

Not just a funny bit of storytelling, Relief Valve is also a gratifying suspense. With questions surrounding the target of the crimes in addition to the identity of the perpetrator, there’s plenty to here to keep readers guessing for quite a while. Although I wasn’t really shocked by the ending of the story, getting there was definitely entertaining.

One of my favorite things about this story was the developing romance between Tom and Phil. With their backstory a little less glaring, it was easier for me to more readily support them both, even though I could still appreciate the apprehension expressed by Tom’s family and friends. Tom is an endearing character, making their protectiveness seem more understandable.

Speaking of wonderful characters—Darren and Gary continue to be two of my favorites, transforming every scene they appear in into a delight. There’s no way to do them justice here, but I absolutely adore them both. Tom’s sister, Cherry, won me over early, as well, and I even developed a reluctant fondness for the “Worryingly,” “Helplessly,” and “Terrifyingly Reverend Greg” (there are twelve of these constructions in my copy—each more amusing than the last).

One of the best sequels I’ve read in a long time, Relief Valve is a strong addition to what has so far been an intriguing series. Highly imaginative, it is an adept combination of humor, suspense, and romance, and I felt that the author found a nice balance between the different elements. Having thoroughly enjoyed this part of Tom’s journey, I’m fully committed at this point, and am very eager to move on to the next title.

If you dig up the past, be prepared for some dirt to stick.

The relationship between Tom Paretski, a cheeky plumber with a gift for finding hidden things, and PI Phil Morrison may only be a few weeks old, but already it’s under attack. Tom’s friends and family are convinced the former bully isn’t good enough for him, and they’re not shy about saying so.

Then Tom’s prickly older sister, Cherry, is poisoned at her own engagement party. Tom’s left reeling and not knowing who to suspect. Could it be her new fiancé, Gregory, a cathedral canon with an unfortunate manner and a taste for taxidermy? Or someone from her old writers’ circle, which she left after a row? Or could the attack be connected to her work as a barrister? Meanwhile, Tom’s honorary auntie’s left him a gag gift from beyond the grave that could be more significant than anyone knows.

Phil’s fighting against the clock to solve the case before somebody ends up dead. And with the poisoner hiding a dark secret, Phil’s terrified Tom could have been the target all along.

Reviews in the Series:
Pressure Head by JL Merrow (The Plumber’s Mate #1)