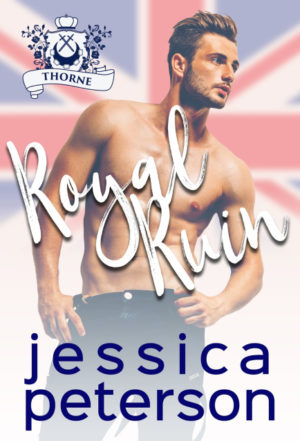 Ten years ago, Emily was an honor student at big economic school in London. Her TA was none other than a prince – and a big one, as in the Queen’s grandson. Kit is enamored with Emily, but stays away because she’s his student and she has a boyfriend. However, when Emily comes to his office, a mess after finding out her boyfriend back home was cheating on her, he gives in to temptation.

Flash forward to present day and Emily has a trendy interior design firm, that is losing money. She’s going on one last interview for none other than the Royal family. While she ends up with the design contract, she also receives a proposal from Kit to be his fake fiancée for a few months. In exchange, he’ll save her failing company.

Royal Ruin was a mixed bag for me. There were parts that I absolutely enjoyed, but there were parts with which I struggled. First the good: I loved how much Kit admires Emily right from the start. He falls head over heels not just because of a physical attraction, but he appreciates her brilliant mind and wit. They make a good team when they gel. And when the pair get real with their feelings and passion, the story is wonderful.

However… I had an issue early on with Emily and it never really went away. First, ten years ago, her world falls apart because the love of her life cheats on her… so what does she do? Uses her TA, and he still has the condom on when she talks to her BF and decides they want to work it out. My thoughts went to Rachel and Ross’s “We were on a break” – one of the worst storylines in the sitcom’s (Friends) long life. Then when time moves to present day, I felt Emily continued to make some poor decisions. For example, why hasn’t she blocked her ex from the ability to call or text her? They went through a horrible divorce, yet she still has his number in her cell. And don’t get me started on the ex storyline, which felt forced and contrived.

Then there is the Royal family. In one breath we learn how important appearances are, and in the next, they are having obnoxious family squabbles in front of strangers. And when the Queen just says “fake engagement to Emily” will solve their problems, Kit jumps to it. I had a tough time buying this.

Overall, I enjoyed reading the story, however, I did have issues. The characters felt a bit immature and both had annoying traits. It was hard for me to get behind the couple and the relationship for a long time because I really didn’t care for Emily all that much. But I did like how much Kit liked Emily right from the start – it gave some credibility to his actions. I did like the emotions written into the characters as they make the decision to break up due to their respective careers and life goals. Seeing the results of that decision was the only way for the couple to have a chance at an HEA.

FROM THE DESK OF HIS ROYAL HIGHNESS PRINCE CHRISTOPHER

Emily—Thank you for joining me for dinner tonight. And for agreeing to my proposal, as ludicrous as it is. Desperate times call for fake engagements. At least in my family.

I am attaching the contract we discussed. Our lawyers asked that I highlight the following clauses:

• The engagement shall last ninety days

• Beyond required public displays of affection, there shall be no contact of any kind between the parties

The first half of your payment will be deposited into your account upon the signing of this contract. Be sure to note your ring size. We would like to make prompt delivery of the family emerald. The Queen and I thank you in advance for your discretion.

P.S.—Sorry to hear about your divorce. Your ex sounds like a proper knob head.