Please help me welcome back one of my favorite people, Jeffe Kennedy, who is answering my question about what was was like to write the guy’s perspective for The Snows of Windroven…

Getting the Guy’s Perspective

Thanks, Jen, for having me visit! Today sees the release of the standalone version of The Snows of Windroven, which previously appeared in the anthology, Amid the Winter Snow. (The anthology is disappearing today. It might be gone now, but if you hurry, you might be able to grab it still.)

Many of you have already read this novella in the anthology—and a whole bunch of you have preordered the standalone! It’s for the cover, right?

Yeah, I thought so. 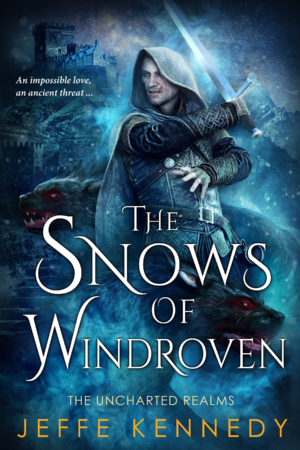 The cover was fun to put together because it’s my first with the hero taking front and center. And the story is much the same way: this is the first time one of the heroes of the Twelve Kingdoms and Uncharted Realms books has had the exclusive first-person point of view (POV). I’ve done some bits and pieces. In Negotiation we get a young Uorsin’s POV in third person. And Heart’s Blood has both Nix and Cavan’s POVs in alternating third person. Otherwise, it’s all about what the heroines see, think and do—and we learn about the heroes through them.

So, why for this novella did I decide to continue Ash and Ami’s story from The Tears of the Rose (the second novel in the overall arc) and why in Ash’s POV?

What do you all think? From what I saw you were all really happy to get this “finish” on Ami and Ash’s tale. Who else needs more of their story told?

A new power is at work in the Twelve Kingdoms, unbalancing the fragile peace. For the High Queen and her sisters, it might mean a new alliance—or the end of the love of a lifetime…

As a howling blizzard batters the mountain keep of Windroven, Ami, Queen of Avonlidgh, and her unofficial consort Ash face their own storm. Their passion saved them from despair, but Ash knows a scarred, jumpy ex-convict isn’t the companion his queen needs. He’s been bracing himself for the end since their liaison began. When it finally comes, the shattering of his heart is almost a relief.

With a man haunted by nightmares and silent as stone, Ami knows only that Ash’s wounds are his own to hide or reveal. She can’t command trust. But just as they are moving apart, a vicious attack confines them together, snowbound and isolated with an ancient force awakening within Windroven itself. If they truly mean to break their bond, Ami and Ash must first burn through a midwinter that will test every instinct—and bring temptation all too near…

Publication Date:March 12, 2018
Previously published in the anthology
Amid the Winter Snow

In celebration of the release of The Snows of Windroven, Jeffe is generously donating a paperback copy of The Tears of the Rose, the book that started Ami and Ash’s romance. (It’s probably my favorite of the series!) To enter to win, please fill out the Rafflecopter form below.

This giveaway is sponsored by the author. Open to U.S. and Canadian mailing addresses only. Contest rules and entry information is provided on the Rafflecopter form. Open to participants who are legally allowed to participate in such a contest as allowed by their local laws. All federal, state, local, and municipal laws and regulations apply. Void where prohibited. No purchase necessary. By participating in the contest, participants agree to be bound by the decisions of the contest sponsor. Prize will be delivered by the contest sponsor. This blog, its reviewers, and the owner are not responsible for items lost in the mail. By entering this giveaway, participants agree to abide by these terms.