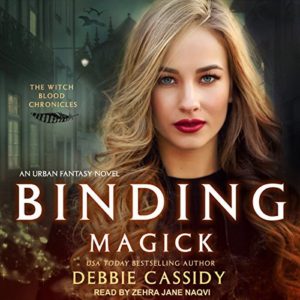 Binding Magick was something entirely new to me and I absolutely enjoyed it.  Ms. Cassidy wove an intriguing and gripping urban fantasy mystery full of mythological characters that were fresh and enthralling.

Carmilla is a dud of a witch, a disappointment to her witchblood mother, and pretty much ignored by the witchblood community until she unwittingly accepts a bargain with a Djinn.  She then finds herself with power she never knew, but also a new purpose – to help find the entity responsible for kidnapping some of the Djinn’s people, as well as Carmilla’s friend (boss and landlord), Ovashi.  Carmilla is a very down-to-earth strong but compassionate character.  I loved her personal mission to assist those down on their luck.  Her dedication to the shelter is only an example of her desire to make the world a better place.  Even with the amount of magic at her fingertips, it was tempered by her humanity.  I really connected with Carmilla and her feeling of being a disappointment.  Her strive to make a difference even if it wasn’t via powerful magic. Her determination to help even before it directly affected her.

The story flows well, the mythology is rich with a more Eastern twist on supernatural creatures and gods.  The nature of her bargain with the Djinn was also deeply fascinating.  I enjoyed how complicated things became for both of them.  Part of me wishes I had read this novel as many of the words were a bit foreign, leading me to believe that the author may be British, not to mention difficulty hearing the nuances of some of the Eastern sounding names.  Please excuse any and all misspellings in this review as I am spelling them phonetically and mean no disrespect.

At first, Ms. Naqvi’s voice was a bit surprisingly high.  Most of the female narrator’s I’ve listened to have mostly been more altos.  However she truly captured the personality of Carmilla.  Her natural high voice conveys some of her innocence and compassion that would not be conveyed by the previous narrator’s I’ve heard.  The other various character voices were well done and easily distinguishable.  I look forward to her being the voice of Carmilla in the upcoming novels.

If you are looking for something with a more Eastern Mythological flair, I think this is a great series to pick up.  The steely will of Carmilla is beautifully tempered by her compassionate nature.  I eager look forward to her next adventure.

Story: A
Narrator: A-
Overall: A

Being left behind to hold the fort every time the world needs saving, sucks.

For Carmella Hunter, a witch blood with practically no magick, being surrounded by powerful friends has taken its toll. For once it would be nice to be the one doing the saving. Stuck in a dead end job in Piccadilly’s favourite bakery, Carmella spends her days making cinnamon rolls and her evenings feeding the homeless, all the while dreaming of making a difference.

One huge pastry order for the Covens annual meet and an attack of flu germs leaves Carmella delirious with a fever—too delirious to avoid a fateful bargain with a djinn named Paimon. Bound to do his bidding, his seductive voice in her head and his infuriating arrogance make the partnership a trying one. With Paimon, Carmella gets her first taste of power. A power she must use to track down the monsters hunting Paimon’s people. Suddenly Carmella isn’t so helpless anymore.

Things get complicated when her boss, and close friend, goes missing, and the enforcement agencies don’t seem too bothered about looking for a celestial dancer who likes to sleep around. With the help of Mal Banner, the Piccadilly Coven Elder Witch and self professed playboy, Carmella finally has the opportunity to be the hero she’s always wanted to be.

But someone doesn’t want Carmella digging. Someone will go to any lengths to make her stop.