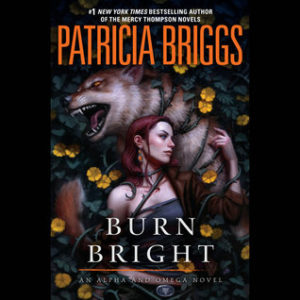 With Bran away, Charles is charged with looking after his pack. Danger strikes close to home, endangering the Wildlings, lone wolves who are too wild to be part of the pack, but remain under Bran’s protection. Unable to reach Bran, Charles and Anna are left of save and protect the Wildlings while trying to uncover who within the pack is a traitor.

While Burn Bright is the continuation of Charles and Anna’s story, the series on whole is deeply connected to its sister series, the Mercy Thompson series, and this story takes place following and refers to the events in Silence Fallen (Mercy Thompson #10/#14). Bran remains away after helping Mercy escape her captors in Europe, but lied about his location to Charles. So when things go sideways and Bran is unreachable, Charles begins to suspect more is going on than a random attack on isolated wolves.

I mostly enjoyed the story as it alternates between Anna and Charles’ POVs, revealing bits and threads that begin to show something larger happening around the pack. The series is at its best when Anna and Charles are in sync, working together to solve a bizarre mystery. And although Charles and Anna work separately for a bit, the trust and love they share makes the pair much stronger than the individuals. And watching them try to figure out who is attacking the Wildlings while trying to understand what secrets Bran has hidden for them to uncover was exciting and engrossing. We meet several new characters that I hope turn up in books down the road.

Unfortunately, there is one part of the book that really bothered me, even though I tried hard to understand why Ms. Briggs would have included it. Specifically it has to do with the relationship between Bran and his foster daughter, Mercy, who doesn’t even make an appearance in the story. Anna and Charles discuss the bond between Bran and Mercy, and the impacts to Bran’s own mating bond with Leah. The implications are upsetting and disturbing, and I feel there was no reason to include it. However, I did enjoy learning more about Leah (later in the book) and her motivations. It made her character more relatable and three-dimensional.

The story is narrated by series-veteran, Holter Graham. I have always enjoyed his performances, although I felt sometimes he had a stereotype-Native American accent for Charles. However, in Burn Bright, Mr. Graham changed up his voice for Charles quiet a bit. So much so, that it sparked a big discussion among my friends on Twitter. While the change was distracting at first, it didn’t take me too long to settle into the new voice and enjoy the performance. Overall, his voices remain solid and character appropriate, adding in a touch of emotion when needed.

In the end, I enjoyed finally getting back to Anna and Charles after a three-year break. It doesn’t seem like the story was as strong as previous tales, but that may have more to do with the shift away from the Fae, giving the book a transition feel. The story builds upon what I love most about this series – the dynamic between Anna and Charles, their bond and love. I liked getting more about Leah; I liked understanding her and her feelings a bit more. The Wildlings piece was interesting, and I hope well see more of them in future titles.

Charles Cornick is the son of the leader of the North American werewolves–and his father’s enforcer. Anna Latham, a rare Omega wolf with a calming presence, is his mate. They go where they are needed, handling problems in werewolf packs throughout the country. But this time, the danger is closer to home, as an enemy armed with witchcraft threatens Charles and Anna’s own pack.