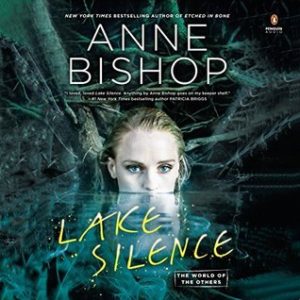 Spinning off from and taking place several months after the conclusion of the original Others series, Lake Silence shifts from the activities of the Lakeside Courtyard, to a human settlement, Sproing, located in the Finger Lakes region of the Wild Country. The story centers on Vicki DeVine, a recently divorced human who received a rundown, rustic “campground” known as the Jumble in Sproing as her settlement. After suffering ten years of emotional and mental abuse by her ex, Vicki enjoys a quiet life rebuilding her property. However, when her tenant, Aggie Crowe (a member of the Crowguard), discovers a dead body on the adjacent property, Vicki and her lodge become the center of much attention, with Vicki a suspect. Soon Vicki finds herself entangled in a fight with her ex and his partners to keep the Jumble. And Vicki also discovers she has a number of Other allies, bringing her face-to-face with the predators living around Sproing.

Lake Silence introduces readers to an entirely new set of characters, location, and a new species of Other; however, there is mention of a few key players from the original series. And although the book doesn’t open with the “history of the world” as did the previous books, there is enough backstory and history woven into the plot that a newcomer to the series could enjoy the book without having read the first five books (but you should!) The narrative is first person when shared by Vicki, with all other characters shared in third person. There is a bit of jumping back and forth between characters and locations, with each perspective adding a piece to the larger picture.

I was a bit apprehensive when starting Lake Silence, because I had grown to love the residents of Lakeside and was concerned I wouldn’t like moving away from Meg, Simon, and the gang. I’m happy to report that my concerns were for naught. I quickly became attached to Vicki, Aggie, and the other residents of Sproing. The story starts with the same premise as the original series: a damaged girl/woman being hunted/harassed, while the Others, Intuits, and humans rally to protect her. Yet, even with the similarities, the story is fresh, exciting, and engrossing. Vicki may not be able to stand up for herself, but she is smart and understands what is happening to and around her. I enjoyed watching her grow and strengthen over the course of the book. Through the development of friendships with both humans and Others, Vicki develops a sense of self and learns to better deal with the abusive tactics used by her ex and his cronies.

As with the original series, Alexandra Harris provides the narration for Lake Silence. Her performance is familiar, yet different, and Ms. Harris is the voice of the series for me. I like that I never was confused that I was listening to the characters from earlier books, yet each voice still felt well-known. Vicki is different than Meg and her voice was older, more mature, yet still tentative when anxious. The Crow and Sanguinati voices are similar to previous books. Additionally, many of the Others are more primitive in this area-unused to human interaction-and their voices and speech patterns mimic this.

In the end, I found Lake Silence an thrilling and very enjoyable story. There is some of the same, but enough differences from the original series to make it engaging and not repetitive. While I was concerned I wouldn’t like the change in location, meeting a whole new set of characters was exciting, and I’ve already become attached to several. Vicky is a work in progress; she did some growing, but has a lot more to do to heal the wounds her ex inflicted, and I hope we will see more of her and the settlement of Sproing in future titles.

Story: A-
Narration: A

Human laws do not apply in the territory controlled by the Others–vampires, shapeshifters, and paranormal beings even more deadly. And this is a fact that humans should never, ever forget . . .

After her divorce, Vicki DeVine took over a rustic resort near Lake Silence, in a human town that is not human controlled. Towns like Vicki’s have no distance from the Others, the dominant predators that rule most of the land and all of the water throughout the world. And when a place has no boundaries, you never really know what’s out there watching you.

Vicki was hoping to find a new career and a new life. But when her lodger, Aggie Crowe–one of the shapeshifting Others–discovers a dead body, Vicki finds trouble instead. The detectives want to pin the man’s death on her, despite the evidence that nothing human could have killed the victim. As Vicki and her friends search for answers, things get dangerous–and it’ll take everything they have to stay alive.