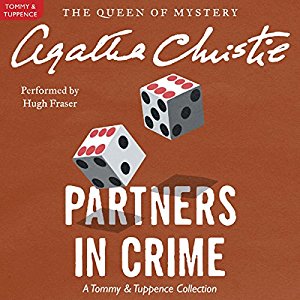 I wasn’t sure what to expect when I picked up this second novel in the Tommy & Tuppence series. However, I should have never feared.  Though the time had jumped forward a bit, I enjoyed the eclectic nature of the series of mini-mysteries.

Partners in Crime is an apt title as Tommy and Tuppence go under cover as… detectives.  Yes, after their success in the previous novel, her Majesty’s secret service request they take over the Blunt’s International Detective Agency to squirrel out more secrets and plots.  After being young newlyweds for a while, they feel they are ready to take on this exciting challenge, especially as Tuppence is feeling restless and a bit bored with life.  While they wait for the villains to make their move, Tommy and Tuppence fill their days with taking on real cases and solving them.  It was really delightful how the story progresses.  I enjoyed watching Tommy and Tuppence work together and at times at odds – trying to outdo the other.

Hugh Fraser does an excellent job of bringing these characters to life; Tuppence’s effervescent personality and Tommy’s cautious nature.  He easily varies his voice as well as consistently making it easy to discern different characters.  His performance enhanced my enjoyment of this novel.

For fans of Agatha Christie, I recommend this novel and the Tommy & Tuppence series.  It’s a more lighthearted mystery/detective genre.  I especially enjoy listening to this series as Hugh Fraser narrates it.  Considering the bit of a hint for the next chapter in their lives, I look forward to the next novel.

Tommy and Tuppence Beresford were restless for adventure, so when they were asked to take over Blunt’s International Detective Agency, they leapt at the chance. After their triumphant recovery of a pink pearl, intriguing cases kept on coming their way: a stabbing on Sunningdale golf course; cryptic messages in the personal columns of newspapers; and even a box of poisoned chocolates.