Audiobook review: The Squirrel on the Train 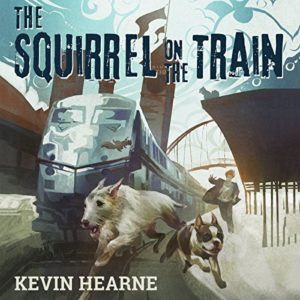 Oberon’s Meaty Mysteries is a seriously funny series of novellas told from the point of view of Oberon the Irish Wolfhound, faithful companion to Atticus, the Iron Druid. This time around Oberon and his furry companions discover a squirrel (the most evilest of creatures) that followed the gang from their home into the city, staying on the train the whole ride. Of course, knowing the squirrel is up to no good, the dogs chase it down, leading the gang smack dab into the middle of a murder investigation.

Kevin Hearne is a mad genius for coming up with such hilarious and creative adventures for Oberon and his buddies. Having the mystery shared via his POV is masterful and so much fun. Even if don’t read the Iron Druid Chronicles, I think you would find Oberon enduring. But for those familiar with this extra special wolf hound, the story is amazing.

The overall mystery is interesting and ties in some surprising aspects from Atticus’s past. I love how the hounds bring their own brand of sleuthing to the case, which truly wouldn’t have been solved without them. The humor is off the charts funny. But it’s Luke Daniel’s performance that makes this clever story an absolute joy! He has such unique voices for each character, developed and honed over the course of at least a dozen stories. I love that his character voices remain distinct and intact over the course of years.

I found the audiobook of The Squirrel on the Train to be a breath of fresh air and the perfect answer to this cold and snowy day.

Story: A
Narration: A+

Oberon the Irish wolfhound is off to Portland to smell all the things with canine companions wolfhound Orlaith and Boston terrier Starbuck, and, of course, his human, ancient Druid Atticus O’Sullivan. The first complication is an unmistakable sign of sinister agendas afoot: a squirrel atop the train. But an even more ominous situation is in store when the trio plus Atticus stumble across a murder upon arrival at the station. They recognize Detective Gabriela Ibarra, who’s there to investigate. But they also recognize the body—or rather that the body is a doppelganger for Atticus himself. The police, hampered by human senses of smell and a decided lack of canine intuition, obviously can’t handle this alone. Not with Atticus likely in danger. Oberon knows it’s time to investigate once more-—for justice! For gravy! And possibly greasy tacos!

Alongside his faithful Druid, Oberon and the other loyal hounds navigate by nose through Portland to find a bear-shifter friend with intel, delicious clues at the victim’s home, and more squirrels. Always more squirrels!

But will our hungry band of heroes be able to identify the culprit before someone else is murdered? Will there be mystery meat in gravy as a reward or tragedy in store for the world’s (or at least the Pacific Northwest’s) greatest dog detective.