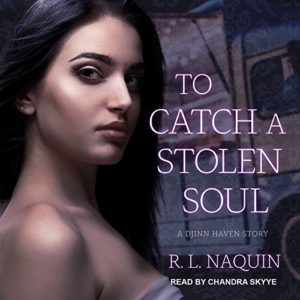 I’m so glad that I picked up this new urban fantasy series, Djinn Haven.  Kam’s adventure was funny, fascinating and intriguing.  Left with a bit of a cliffhanger of intrigue, I cannot wait to listen to the next novel.

Though To Catch a Stolen Soul is a spin-off from another of Ms. Naquin’s series, I did not feel as if I was missing out on any back story.  That being said, with the freshness of this world, I’m interested in picking up the previous series, Monster Haven.  The world is rich with a mix of paranormal creatures, the Hidden.  Kam is a Djinn soul chaser.  It’s her job to chase down souls that for whatever reason when released from their bodies did not move on to the next realm.  Kam is very much a free spirit, only ensuring she has what she needs.  She’s tough but tenderhearted and compassionate.  I liked how she didn’t rely on her powers as much as her own ingenuity.  Her humor and crafty intelligence is endearing as it is intriguing.  Though not a detective, she finds herself in the role and not doing a half-bad job of it.

The plot of the missing reaper and murdered Hidden food-truck operators was compelling.  The darker moments offset by Kam’s wit.  The detective narrative flowed well and though the culprit was fairly easy to puzzle out, there were plenty of twisting nuances that kept the novel gripping.  Plus, we also have Kam’s mysterious intended that is trying to find her while she is trying to stay on the run.  I’m further intrigued by the “Master” that held Kam as a prisoner (think genie in a bottle – only for Kam it was a box).  The relationship she cultivates with the fellow food truck operators along with her own hitchhiker adds richness to the overall feel of the novel.

Ms. Chandra Skye’s narration was complimentary to the personality of Kam.  I enjoyed how she not only conveyed the story but added depth to the personalities of the characters.  Though her voice, I was able to immerse myself in the world.  I look forward to listening to more of her performances.

As I said, I eagerly look forward to the next adventure of Kam, the Djinn soul chaser.  Especially with the story threads left open at the end, I cannot wait to see what happens next.  With the performance of Ms. Skye, I will wait to listen to the next installment as I feel she truly enhanced the novel.

Kam is a soul chaser for the Hidden Government, a much harder job now that the Hidden look like everyone else. Broke, out of magic and sick of playing waitress in a pirate-themed dive bar, Kam jumps at a chance for an out-of-town mission.

A reaper—and his loaded soul stone—have gone missing. The stone contains souls that might get permanently stuck if Kam doesn’t find it, like, yesterday. She tracks the reaper down to a food truck outside Kansas City, only to find a dead reaper and no soul stone in sight. Which means that someone who should be dead killed the reaper and is running around with a powerful magic item. Not good.

And apparently the killer is targeting food-truck owners that also happen to be Hidden. So the only thing to do is open her own truck and go undercover—goodbye Kam the Djinn, hello Mobile Food Entrepreneur—and hope that she and her new runaway friend won’t be the next targets…