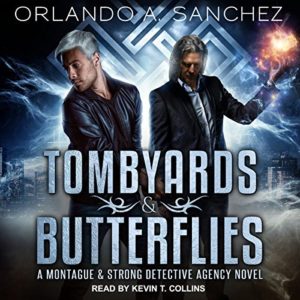 Tombyards and Butterflies is a well-balanced mixture of humor and action/drama in this new urban fantasy detective drama, the Montague & Strong Case Files series.  I look forward to listening to the next adventure of Simon and Monty.  Please note that since I am listening to the story, names and other terms may not be the correct spelling as printed.

The premise and the world is an interesting mix of fae creatures, vampires, werewolves, and magic users that are mixed with mythological gods and entities.  For example one particular important character is Karma.  Yes, she is “the Karma” and she doesn’t care for how most people refer to her.  There is a connection between Karma and Simon – something with his past that binds them in a way they both dislike.  The blending of these different characters was compelling – especially as it appeared that lines between them could blur.

The story begins by following Simon on a job, and we learn a bit about him as well as the world.  The story is told from his perspective and I like his personality.  There are similarities that evoke a bit of Harry Dresden, but only shadows – a compliment from one author to another.  This story felt wholly its own, unique and fascinating, as well as action packed.  Though I feel that there are some fairly strong backstories missing, those of Simon and Monty especially.  I hope we will learn more about them individually as well how they met and teamed up.  The “not-a-relationship” between Simon and Chi is also very interesting.  There might be more information that I missed simply by being so caught up in the story; those tid-bits may have flown over my head.  I look forward to listening to this novel again and hoping to fill in some of the pinprick holes.

Mr. Collins did a fairly good job with his narration.  His natural pace was faster than most narrators I listen to, so I had to reduce my listening speed to 1.25x.  However, I still feel as if the story flew by – it was so exciting.  It felt as if Mr. Collins was just as swept away, as I could hear him at moments catching his breath.  Strangely, I found it added to my enjoyment rather than distracting me.  His character voices were well varied, and I truly enjoyed the personality that he imbued in the characters; Simon and Monty, especially.

If you enjoy a well-blended mix of mythologies, paranormal creatures, and magic with a fast-paced detective drama full of action and humor – this is a series you should try.  Though depending on how much you want to catch detail-wise, you may want to read it before you listen to it.  I will be continuing to listen to this new Montague & Strong Case Files series.

A Missing Ferryman. An Undead Dilemma. An Immortal Detective.

An emissary from the Dark Council has just materialized in the office of the Montague & Strong Detective Agency, and makes Simon Strong an offer he can’t refuse. Charon is missing. The legendary ferryman responsible for transporting sorcerer souls across the river Styx hasn’t been seen in days. And with each passing hour, those unable to cross the river are left to walk among the living, tilting the world further out of balance.

Meet Simon Strong, an immortal, who is also the best private detective in New York City. Together with his surly partner-Tristan Montague, a mage of indeterminate age, they must find the Ferryman and get him back to work  before another Supernatural War ravages the earth, destroys humanity, and Simon’s local coffee shop.

Time is running out. His landlord wants the rent and Karma with a capital K is paying him a visit, and she can be a real…

Join the Montague & Strong Detective Agency and help them locate Charon, so he can restore balance to the universe, put the dead sorcerers to rest, and maybe solve the age old conundrum-coffee or tea?