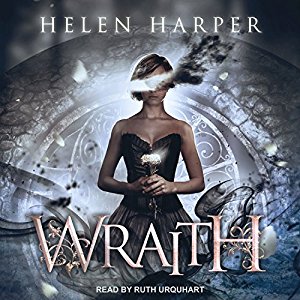 Wraith is a compelling urban fantasy story.  A fascinating mix of Fae mythology and an almost post-apocalyptic world woven with an underdog overthrowing the all-powerful evil army poised at world domination (or at least Scotland domination).

The novel is centered on Saiya, a lone woman who is trying to stay alive.  In this city under siege, she scraps by day-to-day by trading in secrets.  Though the biggest secret she keeps to herself is the fact that she is a wraith.  Her kind are despised by the world as evil assassins with loyalty to none.  Their innate ability to split their shadow self from their corporal body allows them to move unnoticed in shadows.  However, they still can use power to move things, or kill, while in this shadow form.  However, Saiya is an orphan.  She grew up amongst a population that would kill her if they knew what she was, never meeting another like herself. She learned how to harness and use her wraith abilities on her own.  Never knowing some of the more sinister things wraiths are capable of.

Living in Stirling was not so terrible, until a few years ago when the goblin armies went to war and the mostly human city became besieged by the goblins.  The people living there became captives if they were lucky, otherwise tormented, abused, and executed by the goblins.  Except for the most wealthy (most of who fled the city), the people left are scraping by on meager rations.  The setting is grim with Saiya and the rest of her neighbors doing their best to get by.  When one of her more trusted neighbors is taken prisoner by the goblins, she helps the young daughter left behind to escape capture.  Saiya is going to try to rescue her mother and hopefully get them both safely out of the city.

What Saiya doesn’t quite count on in this mission is Gabriel de Florinville.  This Dark Elf is powerful and well connected to the government of Scotland.  He enters the city to check-in on the resident population and ensure they are being treated well.  We witness through Saiya the tricks and ploys the goblins use to hide the poor treatment from Gabriel.  For example, taking down the gallows and turning it into a performance plaza.  However as she plays secret spy, Gabriel captures her.  Though she is able to escape, barely.  While trying to obtain her shadow back, she and Gabriel connect in a way she had never felt before.  Normally the touch of another is painful to a wraith, but Gabriel’s touch is quite the opposite.  As he appoints himself her protector, she pulls him into her mission.  Partnering up to discover the secret drive of the goblins for taking this particular city, rescuing her neighbor, and thwarting the evil goblin plan.

What I really enjoyed about the partnership between Gabriel and Saiya is complicated.  Saiya is Gabriel’s fated mate.  Something that both intrigues and disgusts Saiya.  She wants to be loved and desired, but not if it is only through some sort of breeding drive.  With Gabriel’s (along with the rest of the world’s) innate hate of wraiths, Saiya needs to keep a part of herself from Gabriel, feeling she cannot trust him. One of the best parts of their teamwork is that Gabriel is trusting of Saiya and her skills pretty early on.  He respects her ability to take care of herself which I loved.  Though Saiya knows she can depend on him in this quest, her battle of personally trusting him was a griping plot twisted through the novel.

Ms. Urquhart did an excellent job in capturing the personality and viewpoint of Saiya.  I enjoyed the variations of voices making it easy to discern dialogue.  Her performance allowed me to fully integrate myself into this world.  Though I felt I may have missed a bit of background, I was easily able to immerse myself in the current events and lose myself in Saiya’s plight.  I would listen to this novel again.

The blend of urban fantasy with a city under siege woven with the complex mythology was utterly fascinating.  I was intrigued by Saiya’s determination to help and enthralled by her journey with Gabriel.  This world was so interesting, I hope the author will revisit it and tell other stories in it.  If you are looking for a thoroughly satisfying urban fantasy with a hint of something different, pick up Wraith.

Magic.  Shadows.  Adventure.  Romance.  Saiya Buchanan is a wraith, able to detach her shadow from her body and send it off to do her bidding.  But, unlike most of her kin, Saiya doesn’t deal in death.  Instead she trades secrets – and in the goblin besieged city of Stirling in Scotland, they’re a highly prized commodity.  It might just be, however, that the goblins have been hiding the greatest secret of them all.  When Gabriel de Florinville, a Dark Elf, is sent as a royal envoy into Stirling and takes her prisoner, Saiya is not only going to uncover the sinister truth.  She’s also going to realize that sometimes in the deepest secrets are the ones locked within your own heart.