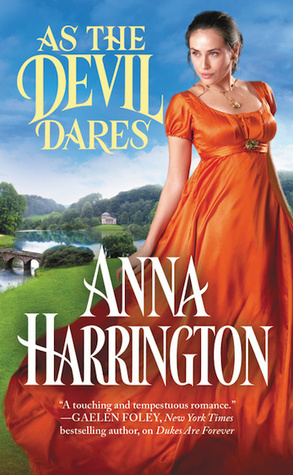 In an effort to seek the approval of his deceased father, Robert has spent the past two years planning for the chance to be part of Winslow Shipping and Henry Winslow’s partner. The catch: Robert must find a husband for Winslow’s unruly daughter, Mariah, aka the Hellion.

Mariah grew up without her mother, at her father’s side at the docks and shipyard. She knows Winslow Shipping inside and out and hopes to run the family business someday. But her father wants Mariah to be a proper lady, and instead seeks to find a partner outside the family. She’ll do everything she can to foil Robert’s plans to marry her off and take the company for himself.

As the Devil Dares is a fun story with an enemies-to-lovers romance. Robert and Mariah are at odds from the start – both vying for her father’s attention and a piece of Winslow Shipping. Each is running from their own demons, having solid reasons for wanting to hold Winslow’s favor. But placing Robert in charge of Mariah’s season and finding her a husband creates a forced proximity with hilarious consequences. Mariah does everything she can to go along with the plan, while simultaneously working against the idea of marriage.

As the pair spends time together, they start to get past their ambitions and see true natures beneath rough exteriors. They learn about one another, finding commonality in the death of a parent. Both are motivated and can appreciate the drive of the other. However, as all good stories go, mistakes made prior to their friendship developing come to light, causing conflict and drama. While it was obvious from the start that the conflict would occur, Ms. Harrington weaves a solid and entertaining story that kept me engaged.

In the end, I enjoyed this third story in the Capturing the Carlisles series. Ms. Harrington has become a must-read author for me. I love her unconventional, strong-willed women who defy their time and go after what they want, and As the Devil Dares is another delightful example. Mariah and Robert are the perfect pairing, finding true love after learning to be friends then lovers.

Whether it’s business or pleasure, Lord Robert Carlisle never backs down from a dare. But finding a husband for scandalous Mariah Winslow? It’s one challenge he instantly regrets accepting. Even with all his connections—and rakish charms—Robert will have to use every trick in the book to marry off a woman with no dowry and no sense of decorum…no matter how stunningly beautiful she is.

Mariah Winslow has no intention of being a pawn in Lord Robert’s game. She knows he agreed to play matchmaker only to secure a partnership in her father’s shipping company, a partnership that’s rightfully hers. For now, though, she’ll dress for the elegant balls he throws and dance with the eligible bachelors he chooses. But she won’t be outwitted by the devil himself—no matter how tempting and irresistible she finds him.