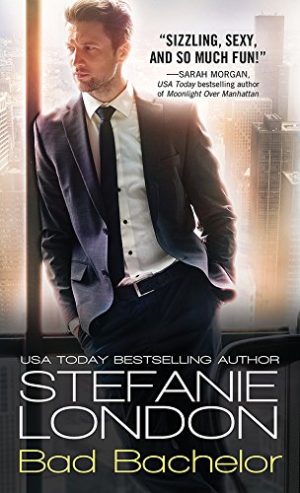 I liked Bad Bachelor by Stefanie London much more than I expected to.  Reformed bad boys are a popular, possibly overdone, trope in contemporary romance and it takes skill to do it well.  The difference for me was that I genuinely liked all the characters in Bad Bachelor.  London successfully managed to create conflict without any real bad guys.  There was no one I wanted to hate or inflict with bodily harm for being a jerk or worse, being immature.  All the characters had jerk moments, but it didn’t consume their character.  London carefully walked a line of not letting the jerk moments turn her characters into cliche’d charactures, while still maintaining tension.

Bad Bachelors is an app that let’s women rate and review their dates.  Bad boy Reed McMahon is on the top of their hit list and it’s starting to affect more than just his dating life. He and the reader are left to wonder who created the app and the source of his or her personal war with Reed.  Really good twist there.  I love it when I didn’t see something coming.

Darcy Greer is a combat boot wearing, tattooed, take-no prisoners—librarian.  The woman with a pierced tongue who can quote Shakespeare is a wonderful contradiction, but not.  She is a complete character and by the end of the book, we wouldn’t change a thing.

The way that she and Reed approach their association and eventual relationship works. There is some explicit sex, but it’s not the focus of the story, the relationship is paramount.  Darcy described it perfectly when she said, “How was she supposed to tell the guy that her relationship with his son could be described as work with a side of smut?“  As London walks us through it, she is often very insightful, “…she saw something else: a man who was frightened of connecting.  Who rolled in on himself so the spikes faced outward, scaring off anyone who might dare get close.“

I appreciated that the plot was well thought-out and developed.  There were only a couple minor things that interrupted my flow, one being a word choice I despise and another a few repetitive phrases.  Neither was unforgivable.  Overall, I very much enjoyed this read.

Everybody’s talking about the hot new app reviewing New York’s most eligible bachelors. But why focus on prince charming when you can read the latest dirt on the lowest-ranked “Bad Bachelors”—NYC’s most notorious bad boys.

If one more person mentions Bad Bachelors to Reed McMahon, someone’s gonna get hurt. A PR whiz, Reed is known as an ‘image fixer’ but his womanizing ways have caught up with him. What he needs is a PR miracle of his own.

When Reed strolls into Darcy Greer’s workplace offering to help save the struggling library, she isn’t buying it. The prickly Brooklynite knows Reed is exactly the kind of guy she should avoid. But the library does need his help. As she reluctantly works with Reed, she realizes there’s more to a man than his reputation. Maybe, just maybe, Bad Bachelor #1 is THE one for her.