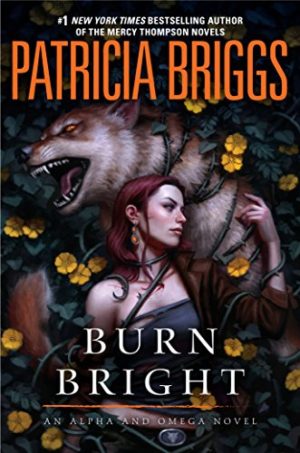 Burn Bright is another fascinating and thrilling installment in the Alpha and Omega series.  Gikany and Una were fascinated by the more in-depth look into some of the relationships in the Mercy Thompson World.

This series is one of our all-time favorites: the world-building, the characters, and the ever-changing politics – it’s all captivating.  The contrast of the Alpha and Omega series is that we experience Mercy’s world from a completely different perspective (sometimes several).  There is an interesting insight presented early in this novel about Bran.  In fact, though he is absent for most of the novel – we learn an incredible amount about him, especially in regard to his relationship with Leah.  The more we discovered, the less (in some ways) it was to dislike Leah. She is a tragic character – and though it doesn’t excuse her behavior, it does help us to understand why she is that way.

The plot of this mystery was fascinating.  Learning about those wolves that Bran keeps in hopes they can heal was immensely telling about his personality.  The sleuthing to uncover the traitor was just as intriguing, but the reveal was shocking.  Though it makes perfect sense – we were a little sad about how it all turned out.  The traitor is dealt with, however, we still think there is a great threat out there and we eagerly look forward to finding it out.

Burn Bright is another enthralling adventure in the Alpha and Omega series.  If you haven’t journeyed into Mercy’s world, you are truly missing out on a staple of urban fantasy at its best!

They are the wild and the broken. The werewolves too damaged to live safely among their own kind. For their own good, they have been exiled to the outskirts of Aspen Creek, Montana. Close enough to the Marrok’s pack to have its support; far enough away to not cause any harm.

With their Alpha out of the country, Charles and Anna are on call when an SOS comes in from the fae mate of one such wildling. Heading into the mountainous wilderness, they interrupt the abduction of the wolf–but can’t stop blood from being shed. Now Charles and Anna must use their skills–his as enforcer, hers as peacemaker–to track down the attackers, reopening a painful chapter in the past that springs from the darkest magic of the witchborn…