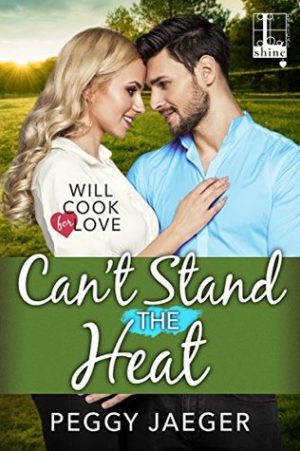 Stacy has successfully produced three cooking shows for the EBS network and is known for being able to get the job done. She recently pitched a new idea for her own show, one her boss is interested in, and tells her he’ll green-light it, if she’ll produce a show for him in Montana. Figuring she can deal with eight weeks on the road, Stacy agrees, only to discover after that the director is one of the best and most difficult in the business.

Nikko doesn’t need anyone from the network looking over his shoulder and making changes to his program, so he was ready to hate Stacy the minute he saw her. However, she’s unlike anyone he’s worked with before and his daughter seems to like Stacy, and the more time he spends around her, Nikko realizes he needs Stacy for more than just his television show.

Can’t Stand the Heat is the third, standalone story from Ms. Jaeger’s Will Cook for Love series. While characters from the first two titles make an appearance in this title, and we originally meet Stacy in the first book, having read the previous books isn’t necessary to enjoy Can’t Stand the Heat. Unlike the first two books (and much to my joy), this story is straight up contemporary romance, without any bit of suspense or danger tossed in. The story focuses on Nikko and Stacy—getting to know one another and learning how to move on from past heartache and pain.

At the start, Nikko is an ass, not just to Stacy, but to all those he works with. He’s a perfectionist and master of his trade, but he’s unkind. His demeanor is in part due to his control freak nature, but also partly due to the physical pain he endures, stemming from a car crash that killed his ex-wife (the mother of his teenage daughter) less than two years prior. Worry for his daughter, whose life was completely rearranged by the death of her mom, provides additional stress, making Nikko unbearable most of the time. Yet, he is a smart man, and he recognizes the truth in Stacy’s kindness and learns how to become a better man by accepting her generosity, which allows him to grow.

Meanwhile, Stacy has her own demons that drive her work ethic. However, she’s balanced, using yoga as an outlet for stress and physical pain. She is open and giving, and great at her job. She refuses to let Nikko scare her off. Yet, she’s strangely attracted to the man, and absolutely adores his daughter. She’s so good-natured, there really isn’t anything bad to say about the woman.

When each started showing an interest in the other, I have to say I struggled with their relationship. As much as I liked both, at first their story was all say instead of do: we didn’t see them growing close, we were only told they each felt a physical attraction. Their interactions were toxic mostly, so the attraction felt off. Yet as the book progressed, Nikko and Stacy spend more time together, and we got to know them better, and we saw barriers come down.

In the end, I really enjoyed Can’t Stand the Heat, and it’s my favorite in the series to date. I appreciated seeing Nikko and Stacy become friends and grow close. I loved Stacy’s connection with Nikko’s daughter. Generally, the characters are good people, and they deserve good things. The ending really warmed my heart.

With three successful TV series under her belt, including her cousin Kandy’s, executive producer Stacy Peters is ready to helm her own show. But to make that happen, she has to do her network boss one favor first—spend two months on a ranch in Montana wrangling the notoriously difficult director of Beef Battles. Apparently, he eats producers for breakfast. Yet all Stacy can think when she meets the lean, rugged man is how hungry he makes her . . .

Dominic Stamp—Nikko to his very few friends—has had enough interference from TV newbies. And when Stacy climbs out of the car in Montana, he’s not convinced she’s even old enough to drive, much less produce his show. But he can’t deny that the long-legged blonde with the stubborn will and the dazzling smile whets his appetite. And as Stacy proves her talent with the crew and the budget alike, Nikko vows to prove to her that love is on the menu for both of them . . .