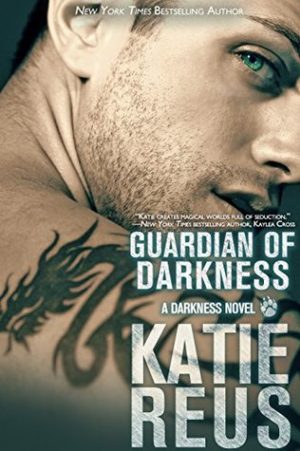 Vega is the half-werewolf, half-vampire daughter of two very powerful supernaturals and has long been the darling of her father’s pack. When we met Vega in the first Darkness book, she was a teenager, and although we didn’t see most of her years since then, she’s now a recent college graduate who is ready to make her mark in the world. Knowing her parents may object, Vega joined a secret government supernatural Black Ops team and is heading out on her first mission.

Gabriel has known Vega is his destined mate long before he even met her, and when his feelings started to become more-than-a-Guardian in nature, he put distance between himself and Vega. He thinks staying away from her will prevent the vision of her death coming true; however, when he sees her strike out on her own with a dangerous group, he is compelled to intervene. Now he’s part of her Black Ops mission and heading straight into the heart of his former home, where he foresaw Vega die.

Ms. Reus’s Darkness series is a favorite of mine. I enjoy the breadth of the mythology, bringing in all types of supernatural beings, including different half-breeds, each unique and with interesting abilities. Vega is a wonderful example; she was something different and new to the Pack when we first met her, and her abilities continue to evolve as she matures.

One thing I adore about Vega and Gabriel’s story is the straightforward nature of relationship. Don’t get me wrong – there is subterfuge, and both keep secrets, but once they are together and working on the mission, they open up. For example, Gabriel’s vision was used in the past as a way to keep the pair apart, and could have easily continued to remain a secret, but he shares with her his knowledge and concerns rather than allow them to fester. Likewise, Vega could have hidden her sleuthing activities from Gabriel, but she is honest, and they work as equals on a team. The mutual respect and admiration ignites their sexual chemistry, and they cannot keep their lust at bay.

Guardian of Darkness introduces several new interesting individuals to the Darkness world, each with ties to existing characters. While the addition of so many new players could feel cumbersome, Ms. Reus integrates each with a solid storyline, and in the process has created several new intriguing avenues for the series. I’m most interested in August, the bear-hybrid shifter and leader of Vega’s Black Ops team.

In the end, Guardian of Darkness is an enjoyable, exciting addition to one of the few paranormal romance series I continue to read. The mythology is both traditional and inventive, and with the introduction of so many new players, I continue to look forward to each new title.

He saw her die in a vision…

Before five years ago, Gabriel had never met Vega, but he knows how she’s going to die. He knows he’ll be involved… unless he can make sure they never meet, never cross paths, so that his vision will never come true. So he left his pack behind, joined the Stavros pack and was determined to never let that future play out. To never meet her at all. Fate had other plans—and she walked right into his life when he least expected it. For the last five years he’s avoided Vega whenever possible even while trying to keep an eye on her. But when she gets cagey with her pack and disappears, he has no choice but to follow her. Now, circumstances are forcing them to work together and he’s determined to protect her against any threat. If that means dying for her, he’s more than willing to. But she doesn’t want his protection. If anything, she’s determined to prove she’s stronger than everyone thinks.

She’s writing her own future…

Vega isn’t the same moody teenager who came to live with the Stavros pack all those years ago. With college behind her, she’s been recruited by a division of the government’s supernatural Black Ops. Trained and more than ready for her first mission, she doesn’t expect Gabriel to crash her assignment. To save her cover, they pretend to be a couple. But soon lines are blurred and neither can deny the incendiary attraction between them. As they race to stop a man who wants to sell out their people to the highest bidder, they find themselves fighting for a future together. With time running out, she has no choice but to rely on the irresistible male who’s turned her world upside down. Unfortunately, in order to save the woman he loves, Gabriel has to give her up.