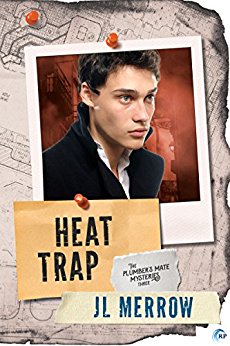 Having enjoyed the first two Plumber’s Mate Mysteries a great deal, I was happy to jump into Heat Trap fairly soon after finishing the second story. And while the half-year interim in the timeline is plenty long in some ways, certain aspects of Tom’s life appear not to have progressed much at all. Granted, Tom was dealt a tremendous shock at the end of Relief Valve, but I was left feeling uncertain at times as this narrative unfolded.

Tom continues to be a likable character, even though I was disappointed by some of his reactions, especially towards Phil. The two have been together for more than six months at this point, during which time they’ve exchanged both house keys and “I love you’s,” and are making plans for the near future. Rather than appearing more solid, however, it felt as if Tom’s faith in him was too easily shaken when tensions began to escalate, resulting in him keeping Phil at a distance in the process.

Phil, on the other hand, I liked more than ever. While I was initially skeptical of his interest in Tom—his seeming lack of regret over his earlier treatment of Tom being a sore spot—his affections in Heat Trap are indisputable. He has the anxious, yet hopeful demeanor of someone who has already put his heart on the line unreservedly, and I couldn’t help but be firmly in Phil’s camp for most of the story.

Happily, some of my other favorites are back, and better than I remembered. Darren and Gary, in particular, are delightful in their pre-wedding bliss, and I honestly would have been glad to see them turn up in even more scenes. Tom’s sister, Cherry, is also a more constant presence in his life now, and was a lot of fun when she popped up. The mystery in Heat Trap involves some noteworthy characters from Tom’s preferred pub, “The Devil’s Dyke,” and it was nice to gain more insight into their roles, as well.

Overall, I had mixed feelings about Heat Trap. While I don’t think it shows Tom in an especially favorable light at times, I was thrilled with the way things seemed to be going for him and Phil by the end of the story. The mystery itself was likewise interesting, although it felt secondary to the relationship struggles Tom is trying to come to terms with. Regardless, this has been a wonderful series so far, and I’m very eager to see what’s in store for everyone in the final two stories.

It’s been six months since plumber Tom Paretski was hit by a shocking revelation about his family, and he’s been avoiding dealing with it ever since. His lover, PI Phil Morrison, wants Tom to dig deeper into his history and try to develop his psychic talent for finding things, but Tom’s not nearly so keen. Just as he decides to bite the bullet, though, worse problems crawl out of the woodwork.

Young Devil’s Dyke barmaid Marianne has an ex, Grant Carey, who won’t accept that things are over between them, and he’s ruthless in dealing with anyone who gets in his way.  When Carey threatens an old friend of theirs, Phil and Tom step in to help—but that makes them targets themselves.

What with his uncertainty about Phil’s motives, Tom’s family doing their best to drive a wedge between them, and the uncovering of an ugly incident in Phil’s past, Tom’s not sure who he can trust—and the body he finds in the pub cellar isn’t the only thing that stinks.