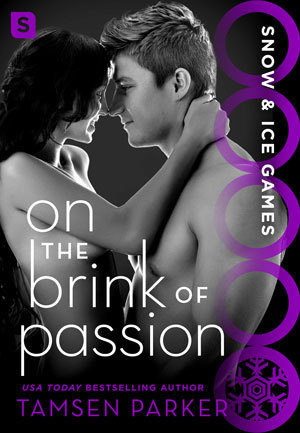 On the Brink of Passion
Author: Tamsen Parker
Reviewer: Jen
Rating: A

Jubilee, a veteran SIGs pairs figure skater, has returned to the spotlight with new partner, Beckett. She was the SIGs four years ago with her husband as her partner, but shortly after, he suffered an untimely death. Vowing never to lose so much all at once again, Jubilee appreciates Beckett because he is hard working, dedicated, and has no desire to her friend.

Beckett missed out on the SIGs four years ago, after which his then partner and lover, Sabrina, dumped him. Finding Jubilee was a godsend, and the fact that they are favored at the SIGs after only two years together is almost a miracle. Beckett is looking forward to the competition, and everything (and everyone) that comes along with the ride.

Through a mistake in room assignments, Jubilee and Beckett are placed in the same suite, and neither is happy. Jubilee needs her downtime and private space. Beckett needs to get laid, but the Ice Princess won’t allow him to bring anyone back to the room. So on a dare/joke, the pair decide to sleep together.

On the Brink of Passion is a wonderful, amazing story and by far my favorite of the Snow and Ice Games series. It works for several reasons, namely it punches all my yes buttons. I enjoy books where the primary couple already has a strong sense of an established, non-sexual backstory, which is especially important when characters fall deeply in love on a shortened timeline. I also love books that pull at my heartstrings, allowing me to feel the heartache and/or suffering of one/both characters, but also brings me up so high in their love. Finally, the story is well-written, lacking any side stories or distractions that detract from the ebb and flow of the book.

The romantic journey begins well before the book starts – even though neither Beck nor Jubilee recognize it. The pair meshes perfectly on ice, creating an intimacy even though they aren’t friends or lovers. This gives the book a solid foundation for which their love affair can grow. The ludicrous start, being placed in the same suite and having sex on a dare, creates a forced proximity and more intimacy, once again, even though the characters attempt to keep a distance.

Beckett is strong and kind, funny and determined. There were times I was laughing out loud at his thoughts and actions. He had trouble with past partners and has finally found the perfect match in Jubilee. And once they break out of their standard routine and he gets inside of her mind and body, he realizes he loves her. But Jubilee is so determined for history not to repeat itself that she refuses to acknowledge the strong bond and love she shares with Beck. The give-and-take between the two pulled at my heart, causing me to become emotionally connected to the pair.

On the Brink of Passion follows Beckett and Jubilee as they go from platonic partners to lovers. Watching them grow closer, even though Jubilee is determined not to see history repeat itself, warmed my heart. Their story shares heartache and triumphs in equal measures, giving me all the feels. I absolutely adored their romance and highly recommend it to any and all.

At the last Snow and Ice Games, Jubilee Buford and her husband and partner Stephen Wallace were on top of the pairs figure skating world. The newlyweds won gold and their future looked bright. But just months after she thought her world couldn’t get any more perfect, Jubilee lost everything. After a scrapped attempt at a solo career, her coach found her a new partner and new possibilities in Beckett Hughes.

Beckett’s had a hard time finding a partner to compete with. Someone who’s as aggressive as he is, someone who’s given up as much of their life as he has for success. He finally found a fit with Jubilee two years ago. She’s not much fun to skate with, but Beckett doesn’t need fun; he needs precision and effort and there Jubilee delivers.

When a housing mix-up in the Snow and Ice village forces them to room with each other, they’re suddenly compelled to recognize each other’s human side. And as Jubilee and Beckett start to see each other as people instead of robots on skates, they discover that they’ve got chemistry between the sheets as well as on the ice. But the flames between them in the bedroom might melt any chance they have at medaling, and that outcome is not acceptable to either one, or the country that’s counting on them to bring home the gold and the glory.