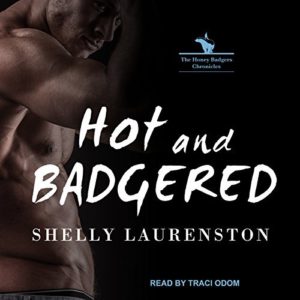 Hot and Badgered, the first book in Ms. Laurenston’s new Honey Badgers Chronicles is a crazy ride full of over-the-top shifters with a thirst for blood… and honey. While it is a new series, I learned from others after I started listening, that it is set in the same world as and features characters from her Pride series. Perhaps I would have enjoyed Hot and Badgered more had I read the earlier series, because one of my issues was the sheer volume of characters and side stories. It was confusing and difficult to follow at times. The story is shared from multiple POVs and can make your head spin a bit.

Hot and Badgered is billed as the romance between Honey Badger/Wolf shifter, Charlie MacKilligan, and Bear shifter Berg Dunn; however, there is very little romance in the book. The story follows Charlie and her half sisters, Max (full Honey Badger) and Frankie (Honey Badger/Tiger), as the run for the lives from an array of dangerous threats. Their father is a major lowlife, who is constantly putting his own kids’ lives in danger, and the Irish MacKilligans are a crime family. So… there is a lot to run from. Good thing Charlie and her sisters know how to fight and take care of themselves. Their adventures are outlandish and there is never a moment’s rest. Eventually, there is a bit of courting between Charlie and Berg – who are adorable together – but the romance is a very small part of the overall story.

While the tale itself was somewhat interesting, definitely exciting, and mostly entertaining, the characters could be mildly annoying. They are always fighting, and they are all completely over-the-top. Everything is outlandish and dramatic. I will admit that after a LONG while, the Mackilligan sisters and Dunn triplets grew on me, but the story went on way too long and had too many side characters and subplots.

The narration from Ms. Odom was solid. She used distinct voices for each character, easily recognizable whenever I picked up the book and started listening. Some of the voices felt cartoonish or exaggerated at first, but as the book went on, I realized that those voices fit the nature of the characters. She pulls of several accents, some better than others, but again, narration suits the craziness of the characters.

In the end, I found myself enjoying Hot and Badgered, silliness and all. It was a rough start and a bumpy journey, one that I wish had fewer supporting characters and storylines, but I found it entertaining, and anticipate I will pick up the second book.

My Rating: B-
Narration: B

It’s not every day that a beautiful naked woman falls out of the sky and lands face-first on grizzly shifter Berg Dunn’s hotel balcony. Definitely they don’t usually hop up and demand his best gun. Berg gives the lady a grizzly-sized t-shirt and his cell phone, too, just on style points. And then she’s gone, taking his XXXL heart with her. By the time he figures out she’s a honey badger shifter, it’s too late.

Honey badgers are survivors. Brutal, vicious, ill-tempered survivors. Or maybe Charlie Taylor-MacKilligan is just pissed that her useless father is trying to get them all killed again, and won’t even tell her how. Protecting her little sisters has always been her job, and she’s not about to let some pesky giant grizzly protection specialist with a network of every shifter in Manhattan get in her way. Wait. He’s trying to help? Why would he want to do that? He’s cute enough that she just might let him tag along—that is, if he can keep up . . .