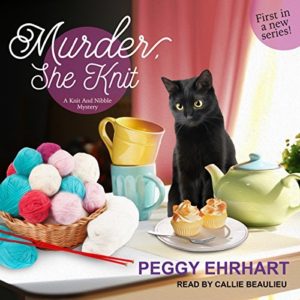 I seem to be gorging myself on cozy murder mysteries and on that thought, Murder, She Knit is another delightful cozy mystery in a New England town.  This was a fun and light-hearted mystery with sly clues and a fascinating amateur sleuth.

Pamela is an editor for a fiber magazine, allowing her to mostly work from home in Arborville, New Jersey, with an occasional meeting in New York City.  An avid knitter, she founded the Knit and Nibble club.  I’m not sure if it was before or after her husband died (five years ago) or because her only daughter is away attending her first year of college.  It’s a group of six knitters that meet weekly to chat, knit, and use it as an excuse to indulge in a sweet treat of dessert with tea or coffee.  On the night when an old acquaintance is murdered outside Pamela’s house, she becomes intent on helping the police (unbeknownst to them) find the culprit.

I enjoyed how Pamela justified her nosing into the case with, “because the police do not always ask the right questions.”  Her keen eye and clever mind serve her well as she methodically eliminates potential suspects.  As a fellow knitter, I really enjoyed the element that knitting (and a knitting club) played in the story.  It was easy for me to visualize myself sitting along with the rest of the club, knitting and chatting.  Pamela’s best friend, Bettina acts as a Dr. Watson to her Sherlock.  The case was fascinating, and I enjoyed following along with Pamela as she figured out the who, what, and why.  It wasn’t until the very end did I finally, like Pamela, put all the pieces together.

Bettina and Pamela’s daughter, Penny, were delightful.  There is a very small side plot regarding Pamela and her new neighbor, Rick.  Bettina and Penny are clever in trying to encourage Pamela to start dating.  Though Pamela claims she isn’t ready, Bettina and Penny think so.  With noticing the young ladies leaving Rick’s and his lack of care in keeping up this house he just recently moved into, she doesn’t think he’d tempt her, that and he is too young for her.  Pamela is more concerned with feeding (and hopefully adopting) the little black kitten that hangs about her home.  That and finding a murderer, editing articles, finding new cast-off treasures, knitting a new project and keeping an eye on her neighbor. It’s just a few things to keep Pamela out of trouble.

Ms. Beaulieu did an excellent job in narrating this cozy mystery.  I enjoyed the personality she provided for the characters.  Though I recently listened to her performing another audiobook, I had no confusion diving into this story.  I look forward to listening to the next audio in the Knit and Nibble Mystery series.

Pamela is hosting the next Knit and Nibble meeting and can’t wait to liven up her otherwise empty home with colorful yarn, baking, and a little harmless gossip. She even recruits Amy Morgan, an old friend who recently moved to town, as the group’s newest member. But on the night of the gathering, Amy doesn’t show. Not until Pamela finds the woman dead outside—a knitting needle stabbed through the front of her handmade sweater . . .

Someone committed murder before taking off with Amy’s knitting bag, and Pamela realizes that only she can spot the deadly details hidden in mysterious skeins. But when another murder occurs, naming the culprit—and living to spin the tale—will be more difficult than Pamela ever imagined . . .