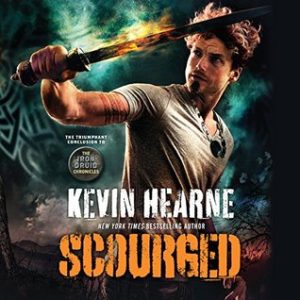 I have so many feelings. I’s overwhelming. Saying goodbye to a favorite series is like saying goodbye to a beloved friend when they move across the globe; you hope you’ll see them again, but you are pretty certain you won’t – and if you do, it won’t be the same. Yes, Hearne is writing more Oberon’s Meaty Mysteries (THANK GOD!!), but those are standalone, amazingly entertaining stories, and not the Iron Druid Chronicles.

Scourged is the story it needed to be, and it was everything a series-ending book should be… we visit all of the characters, both big and small, and readers are subtly brought up to speed on where everyone is and what they are doing. Storylines from as early as the first book are mentioned, and readers are left knowing the end results. The story has such a sense of full circle and closure throughout the entire book.

However, that doesn’t mean I loved everything about Scourged. It’s the tale that had to be told, and the one I didn’t necessarily want to hear. Ragnarök has arrived early all because of the decisions made and actions taken by Atticus, starting way back at the beginning of the series. Luckily, he now has two other Druids (his apprentice/lover Granuaile, and his arc-Druid/teacher Owen) to help defend the earth. And yes, there are entire pantheons of gods and goddess along with a slew of other supernatural beings who are also fighting Loki and Hel. But in the end, it’s all on Atticus to stop Loki and save Gaya.

Along the way to the final battle, the book follows all three Druids as each embarks on separate journeys. Owen is tasked to save Gaya where she needs the most help – where other creatures are taking advantage of the choas of Ragnarök. He is reawakened to the beauty of Gaya, and his mission to raise a grove of new Druids is reaffirmed. He befriends a sloth in the Amazon and takes her for adventures. I loved watching Owen reconnect to the Earth in ways he hasn’t in centuries. I also adored Slo-mo the sloth, although I was a bit bothered by how easily he could communicate with her, especially after learning from Atticus how difficult it is to bind and communicate in that level of detail with animals.

Granuaile is sent to Taiwan on her own quest. She is young, but wise and learns much from the great Monkey King. We’ve been watching Granuaile develop her own path for a few books now, and she has an epiphany or two during Scourged that sets in motion changes for her. I’ve enjoyed Granuaile’s character since the beginning, loved seeing her youthful joy of becoming a Druid, fretted that her emotions would turn her to the dark side, and her adventures in Scourged are an amalgamation of all she’s been though since she first took the leap of faith to become a Druid.

Finally, we have series main character, Atticus. We’ve watched him make decision after decision that leads directly to the events in Scourged. The author used characters to warn Atticus, and the reader, several times throughout the series that the end would be difficult and painful. And it is. I won’t get into details or give spoilers, but Hearne stays true to his world and writes the story he needed to write. Even though it is sombre, we still are treated to Atticus and Oberon’s off-the-wall humor and joyful friendship.

The Iron Druid Chronicles wouldn’t be what it is without the amazing narration by Luke Daniels. A cast of dozens couldn’t do better. Mr. Daniels has honed and refined his voices over the course of the series, and I am still amazed at how many he has. From big to small, from old to young, from human to god, from sloth to dog… he captures the essence of Mr. Hearne’s characters and brings them to life. He fills each with emotion, therefore making the events that much more memorable and real.

In the end, Scourged is engrossing and engaging. I don’t feel like anything was shoved in just to have it make an appearance. The story flowed well. And the humor. Always present. So sharp. The only real disappointment I had with the book is that there isn’t any time with the three Druids working together. I missed that, a lot. They were developed as a set in my mind, and to see them face battles separately was a bit of a let down.

Did I love everything that happened in Scourged? No. But it was a fitting end for an amazing series. One that I will mourn the loss of for quite some time.

Unchained from fate, the Norse gods Loki and Hel are ready to unleash Ragnarok, a.k.a. the Apocalypse, upon the earth. They’ve made allies on the darker side of many pantheons, and there’s a globe-spanning battle brewing that ancient Druid Atticus O’Sullivan will be hard-pressed to survive, much less win.

Granuaile MacTiernan must join immortals Sun Wukong and Erlang Shen in a fight against the Yama Kings in Taiwan, but she discovers that the stakes are much higher than she thought.

Meanwhile, Archdruid Owen Kennedy must put out both literal and metaphorical fires from Bavaria to Peru to keep the world safe for his apprentices and the future of Druidry.

And Atticus recruits the aid of a tyromancer, an Indian witch, and a trickster god in hopes that they’ll give him just enough leverage to both save Gaia and see another sunrise. There is a hound named Oberon who deserves a snack, after all.