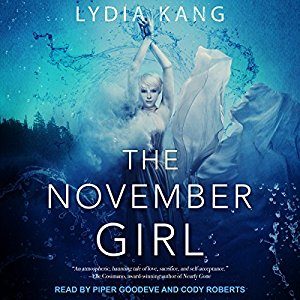 The November Girl is a hauntingly powerful coming-of-age story for two seemingly different but truly similar teens.  I was completely enthralled by this bittersweet yet vividly rich story.

Hector is a runaway.  Being half African-American and Korean, he never has fit in.  He didn’t with his mother in Korea so she sent him to his father when he was six.  However his father being active in the military couldn’t be bothered so Hector has been living with his uncle.  Though living with his uncle isn’t safe and he wants to live without fear.  So he has worked it out.  If he goes to Isle Royale during winter, the island is closed and he will be able to hide out until his eighteenth birthday.  However, what Hector doesn’t know is that he won’t be alone.  No matter how much he planned for roughing it from October to May, he could never have planned for Anda.

Anda is not like other teens.  Living with her father on Isle Royale, Anda is invisible to everyone.  She is half human and half… other.  Every winter Jacob must leave his daughter so she can fulfill her purpose on the island.  She keeps the balance but eventually she will succumb as her sisters did and wholly embrace her mother’s will.  Or it seemed she would until she meets Hector and everything changes.

This is a compelling story of two broken souls that find courage, strength, and the will to change.  Though Anda and Hector seem so different, they are so similar.  Both struggle within the lives they live, they are both straddling worlds while belonging to none.  Though the course of them trying to survive, we learn about not only Anda and Hector, but also about the legend of the November Witch.  As their backgrounds come to light it is heartbreaking the realizations of their lives.   But through this trial, both Anda and Hector come out stronger.  Though riddled with pathos, the ending is hopeful and I loved the terse ending.

Mr. Chambers and Ms. Goodeve’s narration were excellent.  Since the novel changes periodically from Hector’s to Anda’s point-of-view, the changing narrator helped to convey the switch as well as give a different perspective.  They worked well capturing the essence of the main characters while also differentiating the other characters.  They truly enhanced and strengthened this story.

The character development is as strong as the characters.  The setting is rich and the story flows well, winding and twisting reminiscent of an old legend brought to vivid life.  The narrators truly captured the hearts of the characters as well as their emotions.  I really enjoyed this novel and look forward to listening to it again.

I am Anda, and the lake is my mother. I am the November storms that terrify sailors and sink ships. With their deaths, I keep my little island on Lake Superior alive.

Hector has come here to hide from his family until he turns eighteen. Isle Royale is shut down for the winter, and there’s no one here but me. And now him.

Hector is running from the violence in his life, but violence runs through my veins. I should send him away, to keep him safe. But I’m half human, too, and Hector makes me want to listen to my foolish, half-human heart. And if I do, I can’t protect him from the storms coming for us.