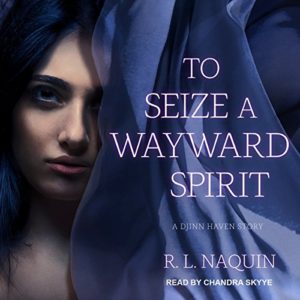 Though a touch less silly, To Seize a Wayward Spirit was another humors urban fantasy novel in the world of Djinn Haven.  I enjoyed the continuing adventures of Kam, her trusty sidekick/intern Ash and Kam’s complicated new trainee, Tahm.

At the conclusion of the previous novel, To Catch a Stolen Soul, Kam is reunited with her family-arranged betrothed, Tahm.  Now trained as not only soul chasers but soul reapers as well, Kam is directed to find all seventeen souls she inadvertently released in the previous novel.  Only her new partner/trainee is Tahm and poor Ash is relegated to intern.  It is obvious that they could have used a bit more training in how to work as a team.  Though they stumble at the beginning, they slowly are learning to listen and trust each other and work as a coordinated team.

As they are going to try to capture one escaped soul, they come across another in the same town. As they accidentally lose that one as well, they try to track down what is going on.  It is funny how Kam and the team discover an AWOL hidden police squad, a serial killer and a fun cosplay convention produced by hidden.  Not to mention a slowly evolving but shy eyeball that seems to follow Kam around.  Like I said, it was a bit less silly, not that the humor was gone!  Though I did like the more somber-at-times Kam – leader of the pack as it contrast with the lovable wacky Kam.  It was a big adjustment for her to go from a fly-by-night soul chaser, working contract to contract with only herself to worry about to a full-time employed Team Leader of a Chaser/Reaper squad.  The noticeable difference shows how much she cares about her job and those under her protection.  I liked how even though she does take this responsibility seriously, she still hasn’t lost what makes her Kam.

I liked how Tahm wanted to get to know Kam as it has been over 100 years since they last saw each other.  However, Kam is stuck in feeling that her love for Tahm is unrequited since she is the little sister of Tahm’s best friend.  It also didn’t help matters that Tahm would try to take charge over Kam, even though she is the senior leader.  Though after a while, it was heartening to see them open up with each other and make an effort.  They are opposites, Kam being the free spirit and Tahm a little more conservative, I felt I saw the glimmer of connection and chemistry between them.  I eagerly look forward to seeing how the future missions go and their continued…courtship.

Ms. Skyye’s narration was again the perfect performance in capturing the varied characters along with the changes moods of Kam.  I really enjoyed the way she captures different “monster” voices, adding to the setting of the novel.  I look forward to listening to her narration in the next Djinn Haven novel.

To Seize a Wayward Soul was a gripping second novel in the spin-off series Djinn Haven.  I enjoyed the Kam’s character development along with her team’s development.  The plot was a great balance of humor and thrills; I eagerly look forward to the next novel in this series.

After a major goof turned their last mission into chaos, Hidden Government chaser Kam and her friends must hunt and recapture a crapton of souls. Seventeen, to be precise. But by the time they chase down the first one—a goblin en route back home to Oklahoma—a banshee ups and gets assassinated, leaving their progress at exactly negative one.

The connection between Kam’s goblin and her banshee? A cosplay club, natch. Because sometimes monsters like to pretend to be humans dressing up as monsters.

As the body count rises and the Hidden cosplayers point fingers at each other, it’s up to Kam and her team to stop the insanity. One costumed faction has a secret they’re not sharing—even with each other—and if the bad seed isn’t found soon, the others are likely to be murdered…or worse.