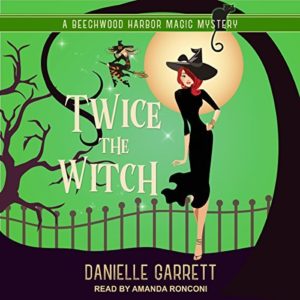 Picking up about a month after the conclusion of the first book, Twice the Witch finds our heroine Holly settled into her life in Beechwood Harbor. She spends most of her time working at the local coffee shop, Siren’s Song, having to cut short time spent with new boyfriend, housemate and werewolf, Adam. Holly contemplates her current situation, knowing she doesn’t want to spend her life working at the coffee shop, hoping to grow her mostly illegal potion selling business. She’s weary of confiding in Adam because of her mysterious past. Holly is also dealing with being one of two witches at the manor. She’s a bit jealous of newcomer Evangeline, but more annoyed with her. Evangeline has her eye on Adam, and seems to be up to something nefarious.

The story picks up speed quickly with the introduction of a newly deceased ghost and her connection to a case Nick, the town’s new PI, is working on. Once again, Holly finds herself wrapped up in a murder investigation, determined to help Nick solve the mystery, using her magically enhanced detective skills without his knowledge. The murder mystery is clever and exciting. I found myself engrossed in the guessing game of whodunit, even when I was worried Holly was sabotaging her relationship with Adam because of how much time she spends with Nick.

In addition to the murder mystery, Twice the Witch explores more about Holly’s past and the Haven system. Through her interactions with Evangeline and Adam, Holly gives readers clues about what got her evicted from the magical Haven system where most supernaturals live their lives. I appreciate the balance of answers and new questions the author puts into the book. I also really like the direction the overarching story takes by the end of the book, solidify some tenuous relationships and creating a solid cast of characters for the upcoming titles.

As I mentioned in my review of the first book, Murder’s a Witch, I picked up the series because of narrator, Amanda Ronconi, who continues to do a marvelous job with the varied cast of characters. Ms. Ronconi narrates the story in the voice of primary character, Holly, infusing her quirky personality with pep and joy. She nails Holly’s nutty persona, bringing her harried, crazy world to life. She also provides a range of voices well-suited to the supporting cast, although I feel her male characters aren’t as varied, and I confused the characters at times.

In the end, Twice the Witch is an engaging cozy paranormal mystery. Ms. Garrett’s storytelling strengthened with this second tale. I found the combination of mystery solving, light romance, and character-driven plotlines entertaining and hard to put down.

My Rating: A-
Narration: A-

There’s a new witch in town…

But before she can wrench Adam from Evangeline’s clutches, she has an amnesiac ghost begging for her help and finds herself smack dab in the middle of another murder investigation in the small town.

Holly has to track down the murderer and save her relationship … all without landing herself in a witch’s duel.