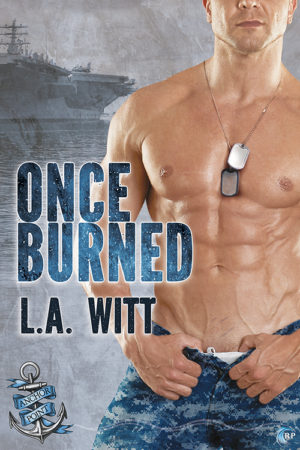 Once Burned
Author: L.A. Witt
Reviewer: B.
Rating: B

On the surface, Once Burned has all the elements this series has been built on: undeniable physical temptation that evolves into real affection, the Navy’s unyielding and destructive rules, and an eventual path to happiness for the two heroes. Unlike its predecessors, however, this story not only concerns Naval policy, but also delves into the even more infuriating topics of immigration and veterans’ rights. While there’s no denying the physical—and later emotional—connection Diego and Mark share, the familiar feeling of time running out was much more palpable here than in previous Anchor Point titles.

Though it is certainly a romance, complete with a HEA, the real purpose of Once Burned is to highlight the predicament faced by too many U.S. veterans. Without knowing the specifics of the author’s research, Diego’s situation reads as a conglomerate of other potentially true stories that absolutely engaged both my heart and my anger. At one point, Diego remembers his employer stating that it’s not “right for a man who’s been shot at for his country to be screwed by it—” a sentiment I found easy to agree with.

There were a few details in Once Burned that seemed somewhat implausible, but which still highlight the desperation and unfairness of Diego’s situation. One that I had trouble with was Mark’s invitation to Diego to attend a “Hail and Farewell” party, disregarding that it would be fairly callous given Diego’s experience, as well as being overly risky with the other personnel likely to be in attendance. So much importance is placed on the threat of deportation throughout the narrative—Diego can’t even go to the VA for medical assistance—that moments like these stood out.

While it has a few uncomfortable scenes (i.e. Mark’s role as savior, even though he tries to minimize the fact), Once Burned served as a launch pad into a problem that I’m eager to learn more about. While researching the topic for this review on my own, I quickly realized that one evening (which turned into two) wasn’t remotely enough time to scratch the surface of the issue. Fortunately, a bill was introduced in the House last year—H.R.3429, or the “Repatriate Our Patriots Act”—that shows promise, but who knows when, or if, it might ever become law. On the plus side, the author has pledged half of her royalties from the sale of Once Burned “to charities supporting U.S. military veterans who have been deported or are at risk of deportation.” There are still two titles left to go in the series, and I’d love to see how Diego and Mark are doing a little further down the line.

Captain Mark Thomas’s world has been tossed on its head: A long overdue but still unexpected divorce. A promotion out of left field. Last-second orders to a ship where careers go to die. As the dust settles in his new home, he barely recognizes his life, but he sure recognizes the loneliness creeping in.

Diego Ramírez wants nothing to do with the military or its men. Not after the Navy burned him both literally and figuratively, costing him his career, his health, and ultimately his green card. Now working illegally in an Anchor Point bar, he keeps the military and its personnel at arm’s length.

But after a single moment of eye contact across the bar, Mark and Diego can’t resist each other. As a one-night stand quickly turns into more, Diego knows he’s playing with fire. Now he can stick around and let things with Mark inevitably fall apart, or he can run like hell and wonder what might have been. One way or another, Diego knows he’s about to get burned. Again. 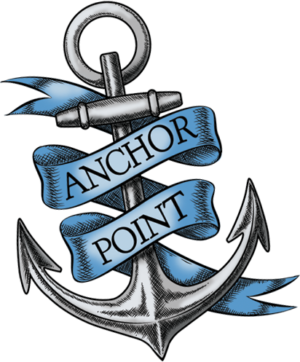 Nestled on the northern coast of Oregon, this small town is home to Naval Air Station Adams. On base, you’ll find freshly minted Sailors who’ve just graduated boot camp, salty officers counting down till retirement, grounded pilots who’ve landed behind desks, and everyone in between—and they’re all looking for love. Well, not all of them, but that won’t stop love from finding them.

So pull up a barstool, grab a beer, and get ready for some sea stories as these men in uniform—or not—navigate the waters of love and life in the military.

Anchor Point stories can be enjoyed in any order. Hop in wherever you’d like!

To celebrate the release of Once Burned, L.A. is giving away reader’s choice of two eBooks off of her backlist! (Excludes Once Burned.) Leave a comment with your contact info to enter the contest. Entries close at midnight, Eastern time, on April 14, 2018. Contest is NOT restricted to U.S. entries. Thanks for following along, and don’t forget to leave your contact info!