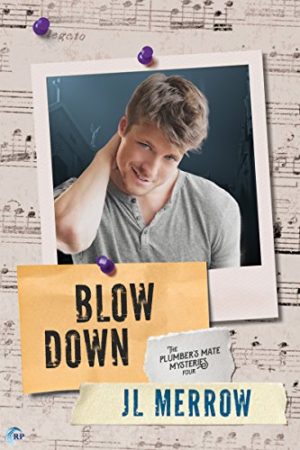 Blow Down
Author: JL Merrow
Reviewer: B.
Rating: B

Several months have passed since Tom Paretski got engaged, saw his best friend married, found out his “Dad” wasn’t really his biological father, and became the resident hero by saving a barmaid from dying in a fire. Now something of a minor celebrity thanks to news coverage exposing his psychic “gift,” he’s in demand for more than his plumbing skills—this time finding himself obligated to unearth a stolen necklace for a recently-wed, high-ranking member of the local diocese (who nobody seems to like very much). At least his life’s not boring.

As was the case with the previous titles in the series, Blow Down begins with the discovery of a corpse. Poor Tom’s knack for finding dead bodies hasn’t subsided at all, and has once again placed him in the crosshairs of a murderer. With multiple suspects all capable of rampant greed, hatred of the deceased, or both, this was an interesting crime for Tom and Phil to crack. Although, in truth, I had more fun waiting to see what they, and the other returning characters would do than I did trying to puzzle out the mystery itself.

One aspect of the earlier stories I wasn’t sure about, but which I thought was among the most enjoyable parts of Blow Down was Tom and Phil’s relationship. While they’re still learning about each other outside of their shared past, I found the teasing, protectiveness, and fondness that’s so evident between them to be endearing. In fact, the entire narrative is more affectionate than its predecessors, yet it maintains the familiar and comforting level of snark that has so strongly contributed to the personality of the series as a whole so far.

Though I wasn’t able to get quite as wrapped up in the mystery of Blow Down as I was in the previous stories, it moved things along just fine. Despite the entirely new group of characters introduced for the purpose, there were somewhat limited options when it came to the sinister narcissism that seemed most indicative of the killer. While there’d be no story without the whodunit, it felt more like a vehicle for everything else that’s going on with Tom, rather than the objective of the narrative.

Having missed the original publication of The Plumber’s Mate Mysteries, I admit that it has been nice to read them so closely together. As someone who is unfamiliar with St. Albans, I found it necessary to refer to a map to better understand the geography of Blow Down, but I enjoyed doing so very much. Similarly, there are a lot of colloquialisms that I had to look up, and I had fun with those, as well. Overall, Tom and Phil have grown on me over the course of the series, and I’m looking forward to the conclusion of their journey a great deal.

Death is what happens while you’re making other plans . . .

The last thing newly engaged plumber Tom Paretski needs is to stumble over another dead body. He’s got enough on his mind already as the reality of his impending marriage sinks in. Not only is his family situation complicated, but his heroism at a pub fire has made him a local celebrity, and now everyone knows about his psychic talents—and wants a piece of them.

Hired to recover a missing necklace, Tom and his fiancé, private investigator Phil Morrison, find themselves trying to unmask a killer. And there’s no shortage of suspects, including the local bishop.

As Tom and Phil try to uncover the truth, they’re pulled in all directions by the conflicting pressures of their families and their own desires. But the murderer they’re up against is a ruthless schemer who won’t baulk at killing again. If Tom and Phil don’t watch out, their love—and all their plans for the future—could be blown down like a house of straw.