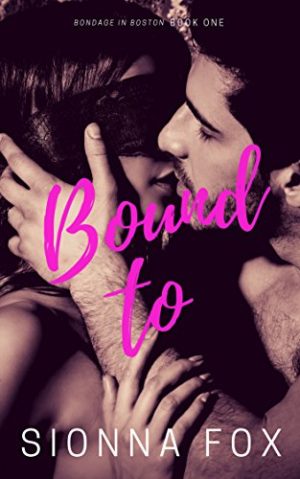 Bound To
Author: Sionna Fox
Reviewer: B.
Rating: B

Having lived her entire life in a small college town where she never really fit in, Jolene Mae Whitford finally decided to make a fresh start for herself in Boston. But, living nearly rent-free in her former roommate’s spare room, without a steady job, while constantly dreading her next anxiety attack isn’t working out so well, either. The only bright spot was meeting Matthew Ward—the older brother of another college friend—and realizing that he she needs to give him control during sex as much as he needs to accept it. In fact, submitting to Matthew is the only thing that has felt good in years. But, what is she supposed to do when even that’s not enough?

Told entirely from Jolene’s perspective, Bound To explores not only the “awakening” of her physical desires, but her evolution and redefinition of self. It isn’t that Jolene is a “mess” or in need of “fixing,” it’s that she’s not who she’s supposed to be. She’s never had the determination or opportunity to find out before. One of the things I felt this story did well was acknowledge that people are meant to change, and that it’s not shameful to accept help from others along the way.

Something else I appreciated is that Jolene’s anxiety isn’t treated as an inconvenience for Matthew (or anyone in their group of friends for that matter) to accept or “cure.” Not that his attempts to help weren’t without some missteps, but mostly Jolene had to be ready to figure out what she needed for herself. Which can be a very difficult thing to do.

Though the primary emphasis of Bound To is about more than sex, Jolene’s induction into the world of dominance and submission occupies much of the narrative. Matthew is honest from the start about what he wants, which is exactly what she needs, but didn’t know how to look for. Every encounter is very explicit and highlighted by the heady enticement of finally exploring what feels right to Jolene, not just good. And while the author makes sure that each one is framed by thoughtfulness, responsibility, and care, it’s also made clear that all relationships are different, and that the “rules” that Jolene and Matthew initially agree on are allowed to evolve.

In the end, Bound To covered a lot ground in a compact narrative. Though it seemed a little textbook in places, and some of the phrasing used gave me pause, I think this story was a good exploration of this particular relationship, while including enough universality to appeal to a wider audience. Regardless, Bound To was at its best when reminding us that getting to know who we really are might alter the person we always thought we were—and that’s okay.

Take one neurotic new girl in town and one kinky neuroscientist, add sparks and a side of sexual awakening. This might hurt later.

Jolene Whitman has never left her hometown, hasn’t been on a date in six years, and when her best friend asks her to move to Boston with her, she jumps at the chance to leave her country mouse roots behind.

Starting over in a new city with one friend, no job, and her bank account bleeding out is enough to send Jolene’s anxiety through the roof. Add in a hot post-doc with a dominant streak and it could be a recipe for a panic attack big enough to send her home with her tail between her legs. But submitting to Matthew Ward shuts up the running monologue in her head like nothing ever has before.

Each night they spend together, exploring the limits of their trust, Jolene falls a little harder for the man responsible for her sexual awakening. Under Matthew’s care and control, she finds a place where she understands exactly who and what she’s supposed to be.

She knows it’s too good to last, that a man like Matthew will never stay with a woman like her. But if the cost of finding herself is a broken heart, she’s all in.