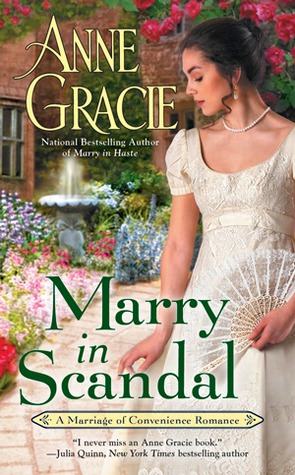 Marry In Scandal is the second title in the Marriage of Convenience series, but it can picked up and read by itself without any issues. If you are familiar with the series, you will enjoy visiting with characters you’ve come to know. If you are new to them I think you will still likely enjoy spending time in their company.

The main characters are Lily and Edward, who are forced into marriage after a kidnapping and rescue bring them together. But despite their lack of choice in the matter they are able to find love, hope, and forgiveness through their relationship.

Lily is a classic Victorian lady with a twist. She is sweet, kind and respectable but the perfect touch of independence, intelligence and just plain pluck. She may have been forced into a marriage of convenience but she going to give it her all to make it work.

Given this desire, she is able to help Edward, our jaded, broken and handsome hero, accept forgiveness from those he loves, learn to forgive himself and help him rebuild bridges he burned a long time ago.

Overall Marry in Scandal is a lovely afternoon escape filled with awful villains who get theirs in fun and unexpected ways, strong loving families, smart, feisty and fun ladies, and strong, handsome men and willing to take on the world for those they love. There are fun, unexpected twists and turns throughout the novel that had me laughing, cheering and sighing out loud… seriously I got some strange looks at Barnes and Noble but it was totally worth it to see Lily and Edward find happiness in the least likely of places, a marriage of convenience.

Shy young heiress, Lady Lily Rutherford, is in no hurry to marry. She dreams of true love and a real courtship. But when disaster strikes, she finds herself facing a scandal-forced marriage to her rescuer, Edward Galbraith, a well known rake.

Despite his reputation Lily is drawn to the handsome Galbraith. In the gamble of her life, she agrees to marry him, hoping to turn a convenient marriage into a love match.

As heir to a title, Galbraith knows he must wed, so a convenient marriage suits him perfectly. But there is a darkness in his past, and secrets he refuses to share with his tender-hearted young bride. All Lily’s efforts to get close to him fall on stony ground, and in desperation she retreats to his childhood home—the place he’s avoided for nearly a decade.

Must Lily reconcile herself to a marriage without love? Or will Galbraith realize that this warm-hearted, loving girl is the key to healing the wounds of his past—and his heart?

Reviews in the Series:
Marry in Haste by Anne Gracie (Marriage of Convenience #1)