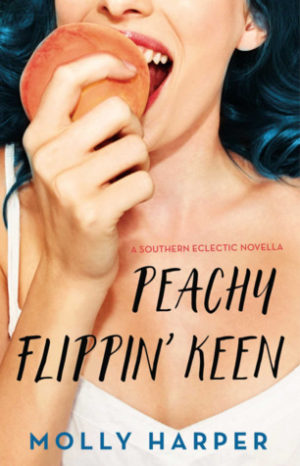 I’m going to put this out there right up front… I am giving this book a C+, even though I really liked the main charters, and I found the story engrossing and dialogue sharp. But here is why it’s not getting an A or B… Peachy Flippin’ Keen starts the story of Frankie McCready and Eric Linden, but comes no where close to finishing it. Peachy Flippin’ Keen is a fantastic beginning, but without the closure of the primary plot nor an HEA/HFN.

Told exclusively from Frankie’s POV, we learn about newcomer Sheriff Linden, who inherited a mess and is trying hard to make his office and position respectable again. He’s a bit cold with Frankie, but that’s probably because the weekend before he arrived in Lack Sackett, the pair had a one-night-stand, and Frankie Uber’d her way out in the middle of the night without saying goodbye. I enjoyed watching the pair tiptoe around each other, marking territory and setting the stage for what hopes to be a promising romance. But by the end of the book, the two aren’t even friends.

Equally entertaining and frustrating is the plot surrounding someone playing pranks on the McCready Family businesses. While Frankie is certain it’s a troublesome teen whose parents think the sun revolves around him, there is no evidence as to who may be playing the bothersome jokes. Unfortunately we still have no clue by the end of Peachy Flippin’ Keen.

It’s not that the book is a cliffhanger. It’s not. But it’s not a complete story either. It’s more like the first eight chapters of the next full-length title, Ain’t She a Peach, which is scheduled for release on June 12th. My recommendation is to wait until June to read this one so you can finish Frankie and Eric’s story without the wait.

A prank war erupts in Lake Sackett, Georgia and coroner Frankie McCready has to turn to the gorgeous but surly new sheriff for help in Molly Harper’s newest Southern Eclectic novella, perfect for fans of Kristan Higgins and Amy E. Reichert.

The McCready Family Funeral Home and Bait Shop has crickets running rampant in the store and hot sauce in the Snack Shack’s ketchup bottles. But as the county coroner, Frankie has enough on her plate without worrying about the increasingly mean pranks being played at her family’s business. And the arrival of Sheriff Eric Linden, both devastatingly attractive and painfully taciturn, is enough to push her over the edge.

Linden, who didn’t seem to get the memo about men in uniform and Southern charm, is condescending and cold, revealing absolutely nothing about his past as an Atlanta police officer, while also making Frankie’s job as coroner as difficult as possible. And with the town’s Fourth of July celebration coming up, it’s essential for McCready’s to be cricket-free and in good working order. Strangling the sheriff will make her job even harder. Can Frankie hold off the threats to preserve her own sanity?