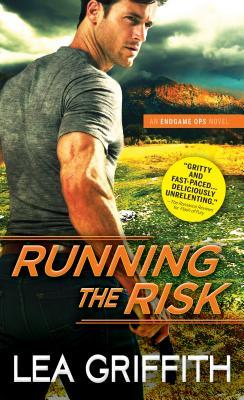 After watching the love of his life die a year ago, Jude continues his work with Endgame Ops, although there is a huge whole in his heart. That is until he sees Ella alive and working with their enemy. Since then, a mix of dark emotions war within Jude, causing him to track Ella down and eventually confront her.

Ella hates deceiving her Endgame teammates, but she firmly believes in the mission-within-a-mission that their leader, the Piper, set in motion. However, the deeper Ella dives, the more convoluted the mission and motives appear. Yet, she is determined to stay put within the enemy camp until she determines who Dresden works for, placing her at odds with the man she loves and his personal mission to save her.

Overall, I found Running the Risk to be a thrilling story and passionate romance. Ella and Jude share a strong history, which makes their connection extremely emotional, which worked for me. Theirs is a deep and lasting love, one that the author planted reminders of throughout the book. One of my favorite passages was when Jude brings Ella to his home after taking her from her undercover job. She does something mundane like brushing her teeth, and it triggers a memory of how Jude would make fun of how much toothpaste she uses. It’s a great reminder that although things have changed between the pair, the solid core remains.

While I really enjoyed the romantic storyline, I found the suspense side a bit more difficult to follow. First, I was a bit put off by Ella’s conviction to trust her shadowy boss rather than her teammates and Jude. The author does a good job of making a case for Ella at first, but after a while, it felt flimsy. Especially when Ella figures Dresden knows she’s still with Endgame. Why would she fight so hard to go back to the monster? Additionally, there are so many players in motion and dead teammates who may not really be dead. There are too many characters for me to keep track of, which makes the story hard to follow when things start to get intense. I tried to follow the actions of Ella and Jude only, letting the rest fall away in the periphery. It mostly worked, even though I am generally someone who likes to piece the puzzle together on my own, before the characters do.

In the end, I enjoyed Running the Risk and felt it was a solid story overall. I really liked Ella and Jude’s second chance romance and the strong emotions it evoked throughout the tale. Although I was a bit overwhelmed with the action piece, it was suspenseful and exciting.

Jude Dagan’s life as he knew it ended a year ago. On a mission gone wrong, he was forced to watch as Ella Banning, the only woman he’s ever loved, was killed. Or so he thought.

Jude wasn’t the only one who lost something on the day Ella was presumed dead. She sacrificed Endgame Ops, the love of her life, and parts of herself she can never get back. Now she’s determined to take down the world’s most dangerous terrorist–even if it means working for him.

When Jude and Ella are reunited, they’ll battle the lies Ella has been forced to tell…and struggle to save a love that knows no bounds.

Reviews in the Series:
Flash of Fury by Lea Griffith (Endgame Ops #1)