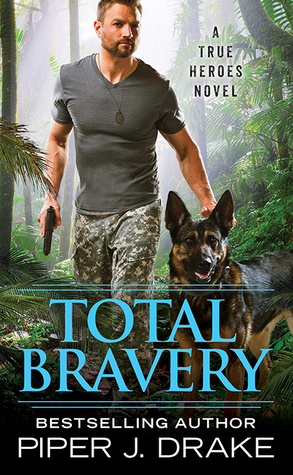 Total Bravery is latest novel in Ms. Drake’s True Heroes series.  After it seemed like all of the men of Hope’s Crossing found their HEAs, we wondered what was next in this series.  We liked this segue into a related group.

We are not fans of instant love in the contemporary romance genre.  This is a big reason why the romantic thread in Total Bravery is one of our favorites in this series.  We loved how patient and honest Raul is with Mali.  Although he is strongly attracted to Mali in a way he has never felt before, he is respectful and treats her like a lady.  It was not the right time or place, but the communication between them was strong.  We enjoyed Mali’s analytical mind.  Her reasoning and ability to observe and absorb were valuable and enticing qualities to Raul.  They worked well together and even though they have a quick tryst, they take the time to evaluate if it was a moment of trauma induced stress or something more.

We continue to enjoy the canine partners that enrich the story.  Although Taz was an integral part of the team, he was not as central to the story as some of the other canines have been.  He made a strong supporting character and we really enjoyed his unique personality.

As much as we have enjoyed the suspenseful plots of the previous novels, this one just didn’t grab us like the others did.  Even though the horrific element of human trafficking was muted, it still was an uncomfortable contrast to the love story.  We also questioned the realistic viability of taking a recently traumatized civilian into a potential combat mission.  Don’t get us wrong, it was incredibly suspenseful and thrilling, but we couldn’t suspend our disbelief.

With the introduction of this new team, we look forward to more stories in this series.  We are eager to see both Mali’s sister Arin and her partner, Zu, find romance.  Both were fascinating characters.  We also wonder if we may get a prequel story that tells how Kalea and Miller met.

True heroes will do anything to protect the women they love…

As the newest recruit at Search and Protect, Raul has a lot to prove. Luckily, he’s got the best friend and partner a man could ask for: a highly trained, fiercely loyal German Shepherd Dog named Taz. Together, Raul and Taz make an unbeatable team. But their first mission in Hawaii really puts them to the test when an international kidnapping ring sets its sights on the bravest woman Raul’s ever met . . .

Mali knows her latest job has put one hell of a target on her back. And on this small island paradise, there’s nowhere to hide. With a service dog like Taz, Mali feels safe. Sharing close quarters with a smoldering muscle-for-hire like Raul, she feels something else – an unexpected wave of desire. Raul feels it too. But when the kidnappers make their move, he’s got to turn that slow-burning passion into hard-hitting action – and save the life of the woman he loves.