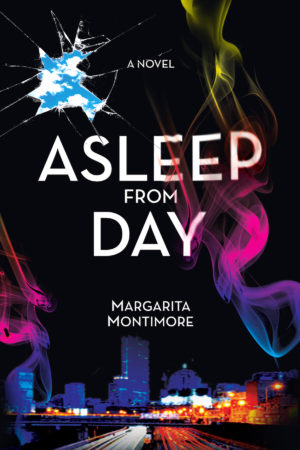 I’m sitting in the dark. There’s murmuring around me.

A male voice behind me whispers in my ear, “Don’t make any noise, don’t stand up, and don’t turn around.”

“Because you need to see this first. Here, have some.”

Something is placed in my lap. I feel around the sides: a cardboard container with rounded edges, open at the top. Its contents have the consistency of packing peanuts. I bring a handful to my nose: popcorn.

His warm breath is against my ear. “I had them put M&Ms in the middle and on top. That’s the way you like it, right?”

My question is ignored. “The movie’s about to start. I’ll stay behind you, but you can’t turn around. And again, you cannot make any noise or stand up.”

“Or else you’ll never remember.”

A dim light illuminates my surroundings. I’m in a movie theater screening room, ten rows back, by the aisle. A handful of other seats are taken, but I can only make out dark silhouettes of their occupants.

Red velour curtains part to reveal a screen. A black-and-white film leader counts down from five, then the image switches to a rainy street. No opening credits, no music, only the booming clatter of thunder and rush of heavy rain. The camera zooms in on the back of a girl, blurry through the downpour. She walks down a residential street flanked with sand-colored apartment buildings and small houses with cemented front yards.

While I watch, there is hot breathing in my ear, followed by a nibble on my earlobe and a tongue tracing patterns along its curved edge. I squirm in pleasure, lick salt and chocolate off my fingers.

On screen, the rain intensifies and stains the pale buildings. The girl quickens her pace, her long hair drenched a muddy brown. There’s a large puddle of water at the next crossing. She tries to hop it, but ends up shin-deep in water.

“What are we watching?” I whisper, taking care not to turn my head, though I want to see the man behind me.

“Shhhhhh…” He runs kisses down my neck.

The soundtrack intensifies with nervous cellos. The camera moves in closer on the girl, who turns her head: she’s me.

“What the hell is this?” I don’t bother to whisper this time.

I’m shushed by everyone around me.

On screen, the girl continues to wade through the puddle, but the scene is intercut with shots of a car speeding toward her—me.

The theatergoers hiss at me to keep quiet.

“You’re making too much noise,” he murmurs in my ear.

Meanwhile, my cinematic twin doesn’t notice the light change or the dark sedan skidding around the corner. She doesn’t hear the car horn over the thunderous rain.

“Turn it off!” I whip around to confront the mystery man but there’s nobody behind me. All the rows are empty.

I throw my popcorn bucket to the floor and push off from the armrests to stand. My legs don’t move. That’s when I notice I’m not sitting in one of the regular seats; I’m in a wheelchair. I try to move the wheels but they’re stuck in place.

I turn my gaze back to the screen, where my other self is being struck by the car. She lands on its hood and puts out a hand to grab at nothing before her head collides with the windshield.

A disembodied whisper fills the room:

Astrid can’t remember the best day of her life: yesterday.

A traumatic car accident erases Astrid’s memories of September 9th, the day she spent with an oddly charming stranger named Theo. Ever since, she’s been haunted by surreal dreams and an urgent sense that she’s forgotten something important.

One night, she gets a mysterious call from Oliver, who knows more about her than he should and claims he can help her remember. She accepts his help, even as she questions his motives and fights a strange attraction to him.

In order to find Theo and piece together that lost day in September, Astrid must navigate a maze of eccentric Boston nightlife, from the seedy corners of Chinatown to a drug-fueled Alice-in-Wonderland-themed party to a club where everyone dresses like the dead. In between headaches and nightmares, she struggles to differentiate between memory, fantasy, and reality, and starts to wonder if Theo really exists.

Eventually, she’ll need to choose between continuing her search for him or following her growing feelings for Oliver. Astrid might go to extreme lengths to find what she’s lost . . . or might lose even more in her pursuit to remember (like her sanity).

Margarita Montimore received a BFA in Creative Writing from Emerson College. She worked for over a decade in publishing and social media before deciding to focus on the writing dream full-time.  She has blogged for Marvel, Google, Quirk Books, and XOJane.com.  When not writing, she freelances as a book coach and editor.  She grew up on Brooklyn but currently lives in a different part of the Northeast with her husband and dog.

Margarita writes upmarket/literary fiction that tends to be left of center and flirt with multiple genres.  While she loves all things dark, strange, and surreal, she’s also optimistic-verging on quixotic-and a pop culture geek, so her works tends to incorporate all those elements to varying degrees.