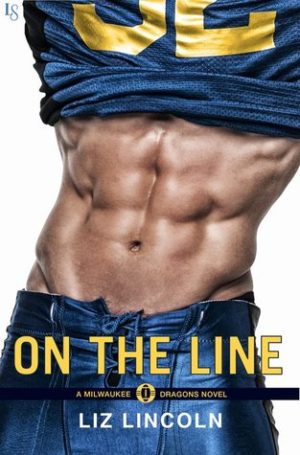 She took several long, slow breaths with her eyes closed, trying to ground herself and remember all the reasons she couldn’t throw herself at Seth and kiss him right that instant. When she finally got her pulse back in the vicinity of normal, she opened her eyes, scanning the lot for a trash can. She didn’t want her mostly empty cup to drip in Seth’s car.

She spotted one near the building and pushed off the hood to walk away. “I’m going to—”

The rest of the words died on her tongue when Seth’s hand wrapped around her upper arm and turned her back toward him. She looked up, taking in the six feet four inches—yeah, she’d looked up his stats—of broad, delicious man filling her vision.

She didn’t breathe as she watched him rake his gaze over her. The hunger she felt in it made her nipples harden to the point of visibility, but she was too turned on to care. As if he didn’t already know what he did to her.

Huffing out a breath, he took the step into her space. Another step forward and her back pressed against the SUV’s hood, his hand slid into her hair, and his lips descended on hers.

It all happened so fast, she didn’t have a chance to process everything. Her body simply reacted, her mouth moving under his as her arms slid around his large body. She clutched his back, pulling him closer; they both moaned.

With her lips parted, Seth’s tongue slid into her mouth and began a wild exploration. She stroked her own tongue against his and elicited another moan. All the while, the coarse hairs of his beard scraped at her skin, adding to the myriad of sensations vying for her attention.

But overshadowing them all was the feel of his body pressed to hers. He slid one arm around her, the other tangled in her hair as his thumb caressed her cheek. His arm held her tightly against him, his hand splayed low on her back.

Restless and reckless, she needed to touch more of him. She wanted to feel all those muscles, feel the power coiled up in his athlete’s body. She slid her hands up his arms and he shuddered against her.

“Carrie,” he groaned, then gave her lower lip a little nip before sinking in deep once again. Lights burst behind her eyelids and she dug her nails into his biceps, drawing a moan that vibrated from him into her.

What would be his reaction to the sensation of her running her hands over his shoulders until they met at the nape of his neck?

He deepened the angle of their kiss and traced his tongue along the edges of her teeth. She nipped playfully at his tongue, and he chuckled and pressed tighter to her.

Pressed his solid erection against her, a little higher than where she wanted it most. But she didn’t chase after it. Not in a public parking lot, no matter how much she wanted to.

And his kiss was too good. Too much from just a little kiss. Her muscles twitched as heat coursed through her. She couldn’t take it. They needed to stop.

Before she could say something, he drew his face back enough to look into her eyes. His own were dark blue and stormy, the lines of his face tense.

“Seth.” She mouthed it more than spoke, barely a whisper escaping. She didn’t have enough breath for more.

He made her sexy. She’d never felt this wild with a man before, this uninhibited. No other man could have inspired her to make out against the hood of a car. But Seth connected with something hidden deep inside her, a woman unafraid to grab what she wanted and take it.

Except she couldn’t take it. Not now. Maybe not ever.

He huffed out a frustrated sound, his breath hot over her lips.

A new wave of desire rolled through her and it took all her restraint not to pull him back down to her and again get lost in his kiss.

“I think I finally understand what singers mean when they say they’re drunk on a woman.” His voice was raw and thick.

She trembled inside at his words, unsure what to think of them, unsure how to respond.

So she said, “We can’t do this.” Her voice came out breathy, but with his chest still pressed to hers, her nipples hard, her breasts heavy and aching, she couldn’t pull in enough air. “But I still . . .” She lifted her lashes and made herself look directly into his eyes.

This close, they were impossibly, intensely blue. Something softened in her chest, leaving a hot, melted ache she didn’t understand.

He felt drunk from kissing her. Holy swoon. No man had ever said something so bluntly honest to her. And she felt it too, a dizzying high buzzing through her simply from having his mouth pressed to hers.

Sex with him would probably be better than the highest-quality narcotic. All the fun, none of the illegality or addicting side effects. 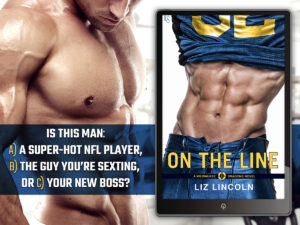 If you’re Carrie Herron, the answer is all of the above. First Carrie starts exchanging steamy text messages with the sexy single dad she meets in line at the grocery store. Then she lands a job—and a bedroom—as the live-in nanny for the daughter of the Milwaukee Dragons’ newest star. But when Carrie shows up for work and realizes that they’re actually the same guy, she has no choice but to try to keep things professional. After all, Seth Chamberlain is her boss now. Her chiseled, charismatic, oh-so-tempting boss. .

After getting traded from Houston to Milwaukee, Seth’s having a tough time keeping his head in the game, let alone setting up his daughter in a brand-new city. So if the only nanny his daughter will tolerate while he’s on the road is the gorgeous, cosplay-loving redhead he’s had his eye on, well, so be it. Surely he can resist Carrie until football season is over. But with her knowing glances and kissable lips driving him wild, Seth must decide whether he’s ready to put everything on the line.

Liz Lincoln has been concocting stories as long as she can remember, and from the beginning they involved two people falling in love. When she’s not writing, she spends her time rooting for the UW Badgers and the Green Bay Packers (or yearning for the return of football season), cross-stitching sassy sayings or nerdy characters (Wonder Woman is her favorite), and drinking too much Diet Coke. She lives in Milwaukee, Wisconsin, with her husband, two kids, two cats, and a turtle.