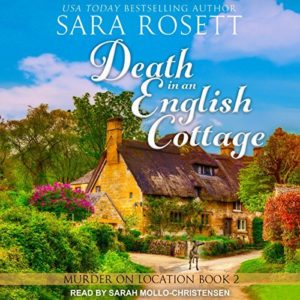 Death in an English Cottage is a delightful and intriguing sequel to Death in the English Countryside.  The burgeoning romance between Alex and Kate along with the mystery of the murdered woman woven was fascinating.

I am a huge fan of slow burn romances and I love how Alex and Kate’s romance is slowly smoldering and working up to a flame.  At this early stage, they are still getting to know each other as well as work together.  However, when a dead body is discovered in a neighboring cottage from Kate’s, more than just finding the culprit is at stake for Kate.  As she gets closer to the truth, she becomes a target, and the documentary crew does not want any negative publicity.  Without a paying job, Kate would have to return to the States, if she cannot find something else – which would put an end to the something brewing between her and Alex.  Though Kate is getting a feeling that Alex may be hiding something, casting a shadow on this crazy decision she made to stay in England.

The murder mystery was fascinating.  However, the identity of the murderer is easy to figure out, the motive behind his actions as well the means were much more difficult to puzzle out.  I enjoyed how different nefarious actions of others were woven into how the murderer is able to cast suspicion on others.  It was really interesting how everything fell into the place at the end.  Kate is truly gifted.  Her ability to slowly unravel the clues, seeing things that the Detective Inspector did not was interesting.  The suspense was chilling as Kate finally figured it all out, almost too late.

Ms. Mollo-Christensen performs the role of Kate perfectly.  She is able to convey Kate’s personality as well as her individual nuances well.  I also like the range of accents and voices she is able to convey, making it easy to follow along with the various characters. Her narration greatly enhanced my enjoyment of this audiobook.

If you enjoy cozy murder mysteries that harken back to the classic British mysteries, you may just want to start on the Murder on Location series.  I enjoy the amateur detective adventures of Kate, the location scout, and the slow-burn romance between her and Alex.  I eagerly await the next audiobook installment in this series.

It’s spring in England, and location scout Kate Sharp has returned to the quaint village of Nether Woodsmoor with its lush gardens, budding hedgerows, and mellow stone cottages to work on a Jane Austen television documentary. The unique opportunity also gives her the chance to explore a possible romance with Alex, the deliciously rumpled local scout.

Rumors of recently discovered Jane Austen letters stir up the production, but then an unidentified young woman dies in a fire in a village cottage, and the police investigation narrows to focus on the documentary crew.

Desperate to keep her job and help a friend under suspicion, Kate delves into the search for the identity of the woman. Who was she? What was her connection to the seemingly sleepy village? And who in the village is lying?

Increasingly worried about Kevin and with an antsy director waiting for updates about the preproduction details, Kate embarks on a search that includes a pub-crawl and cozy cottages as well as stately country manors. But Kevin remains missing, and she begins to suspect that the picturesque village and beautiful countryside may not be as idyllic as they seem.